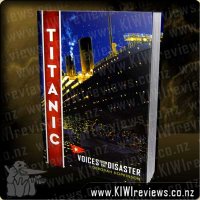 Critically acclaimed author Deborah Hopkinson weaves together the voices of Titanic survivors and witnesses to the disaster to bring the horrors of that terrible night to life. There's nine-year-old Frankie Goldsmith; Violet Jessop, a young stewardess; Jack Thayer, an American high school senior ; Colonel Archibald Gracie, a well-to-do gentleman; William Murdoch, a brave seaman; Charlotte Collyer, a young mother on her way to start a new life; and many others.

Their recollections are filled with heart-stopping action, devastating drama, and fascinating historical details. Now, the saga of the Titanic is told in a brand-new way as, together with a trove of historical photographs and illustrations, the stories of these survivors capture the fateful voyage, from the majestic liner's celebrated launch in Belfast to her cataclysmic, icy end and the Carpathia's rescue of the survivors.

Now, with me being curious about what happened in the Titanic disaster, this book was not only something for me to read during meal times, but it was also a great resource! The facts and pictures were both highly plausible, but also presented in a nice way, a format that people my age would enjoy, although it looked a bit more complex that books that anyone younger than, let's say, 12 years old would be able to read and understand at the same time.

The cover looked fabulous, it really showed the whole theme of the disaster, the whole dark, scary and sad feelings all squashed into one, 2D image printed onto a book cover. The story went well, I wasn't able to tell if it was a story of a pile of facts blended together, it felt like a nice combination of both. The feelings that I got from reading this book ran almost parallel to what people felt while on this once seemingly indestructible cruise ship floating across the sea, the only difference was that the feelings I got were a lot milder.

The price is okay, it is a good amount of money for one to spend on a book like this, after all, I can safely bet that a lot of research and effort was put into making this book, so I can fully agree with the price that this book is worth. I might actually read this book again sometime, maybe during a period where I don't have any books to review...

Overall, I think that you will love this book, it's good for anyone above the age of 12, so have a good time reading!

If you want a beginners guide to the sinking of the Titanic then this is it!

Being released to coincide with the 100th anniversary of the infamous sinking of the Titanic, on her Maiden voyage in 1912, Deborah Hopkinson introduces the reader to the story of the Titanic and how and why she sank.

This book started a little all over the place with different passengers stories which I found hard to follow but then became more cohesive with the information and portrayal of events.

I must confess that my knowledge has been pretty much based on the movie "Titanic" and various documentary's around the search for the Titanics' remains. This was the first book I have read totally dedicated to the Titanic and, thinking to give it a brief glance before sleep one night, I read it cover to cover in one sitting totally engrossed.

I wouldn't say that this book will tell you everything you want to know, and it does leave a lot of questions unanswered, but it is a fantastic starting point. Aimed at 8 years plus it is a brilliant book to introduce the young reader to a very key part of our recent history. This book contains a good bibliography and compilation of source notes and pointers on where to go to learn more.

So if you want a good introductory and basic book on the sinking of the Titanic then this is a must.

Packed with pictures, puzzles, quizzes and fill ins, this monster sized activity book will put your knowledge of the Goosebumps movie to the test. It has tons of trivia, games, activities and much more. Includes one sheet of stickers.