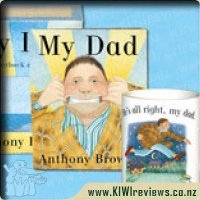 Gift Set includes a mini version of Anthony Browne's book My Dad and a mug.

In an endearing homage to dads everywhere, a boy describes - and exaggerates - the many accomplishments and feats of his father. Among the traits praised are his enormous talent for singing, his near-professional wrestling skills, his extreme bravery in the face of danger (he's not even afraid of the Big Bad Wolf!), and his ability to - quite literally, in Anthony Browne's world - eat like a horse. All of the pictures feature the lovable pater in his signature plaid bathrobe, adding a further comfy layer to a book whose ultimate message is "I love my dad. And you know what? HE LOVES ME! (And he always will.)".

I bought this book in board book form, when I was pregnant with my first baby. I found the book was perfect for my needs. There seem to be lots of books around about the special love between mother and child. But much less in the picture book market about dads. Or the dads in the books don't reflect my husband.

Anthony Browne has done quite a few very good picture books. As an illustrator and writer, he has a style that carries through most of his work. The text in My Dad is quite English. The language is full of slang that you recognise but isn't universal I guess. Like Dad being as daft as a brush, and the chorus of "he's alright, my Dad". The pictures are bright and surreal. Dad's dressing gown changes a bit throughout and he starts to resemble the things he is being compared to.

This book is a favourite with my daughter who loves to have it read to her. Its got a nice and easy style. It's quite a quick read if you are looking for something short, sweet but satisfying. This pack would make an excellent Father's Day or "You're going to be a Daddy" pack, because mugs are much more acceptable gifts than soap-on-a-rope and the book will win the kids over.

Its a gift for Dad for them, which is what most kids like to angle for. Plus the gift of time together and reading too, if you want to get a bit soppy over it. This book is way better than the mum version (but that's because that Mum didn't gel with my self image at all). I only wish he would write a Sister book, as he has also written a Brother book for the series.

The book is such a nice tale and there are aspects of the Dad in the story that all children can relate to. Some of the one's I like and tell my son every time we read the story that his Dad is as daft as a brush too, he can definetly eat like a horse and swim like a fish, and he's all right too. Also his Dad always chimes in at the end when I am reading the story which ends by saying I love my Dad, and he loves me too, and he always will, by saying and that is true too Cai.

I think it is such a sweet tale which is a great tribute to Dad's, I have read a lot of books about Dad's and this is the best one I have come across so far as it is so fitting to my own partner. The mug that came with it features a picture of the Dad and says he's all right my Dad, and my son always goes to try and get the mug when my partner is drinking out of it.

We read the story regularly and my little boy loves pointing at all the pictures. The illustrations are really great and are also done by Anthony Browne himself, real simple drawings which capture the story perfectly. My favourite illustration is the one of the Dad pulling the funny face and when my partner reads the book he pulls the face which always makes Cai laugh.

For the past five hundred years, the Cahills have silently dominated the world. Their desperate hunt for the 39 Clues lies behind some of history's biggest enigmas - the curse of the Hope diamond, the race to summit Mt. Everest, the wild life and death of Harry Houdini. And now - finally - the secrets are out. With an introduction by Rick Riordan, "The 39 Clues: The Black Book of Buried Secrets" reveals the shocking truth about history's most ... more...