« Chuggington - All Buckled Up review

ProdID: 3300 - Play School - Once Upon a Time
Type of Show: Children's Series 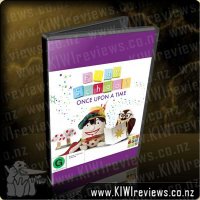 Play School - Once Upon a Time product reviews

Join the Play School team to learn a little about some well known fairytales, while singing songs, listening to stories, making things and going on adventures with Big Ted, Humpty and all the other toys.

I was bought up on Play School but my husband who grew up in Australia is an even bigger Play School fan and is obviously more familiar with the Australian version. We were delighted to find that there are DVDs available of Play School.

We own several Play School DVDs and have borrowed Once Upon a Time from the library a few times. They have been my youngest daughter's favourite DVDs since she turned two. She has just turned three and requests a Play School DVD most days.

As parents we love that Play School formula that we grew up with, the story time, the clock, the windows, the singing and the crafts. It really hasn't changed much over all the years. It probably is a bit more PC these days. They seem to go out of their way to have the presenters in non-traditional roles (males playing females etc.) The other thing we like is that they don't have elaborate sets and many of the props can be made using things you find around the house.

Play School is both fun and educational and as a family we are often singing songs the DVD.

We were lucky enough to be picked to review Play School - Once Upon a Time. I, like many kiwi kids, grew up with Playschool. Big Ted, Little Ted, Jemima, Humpty and Manu. Looking through the arched window, reading the time on the Hickory Dickory Clock. I absolutely adored this show when I was little and I was pretty excited to share this with my daughter

When I showed her the cover of the DVD she was absolutely not interested. She asked to watch anything else but Playschool. But she had never watched Playschool before. This meant that she had no point of reference on whether to be excited or not.

Despite her protests, I put the show on. The DVD has 5 episodes, covering Monday to Friday. She sat down and watched the first episode. I watched her more than the show, and she was absolutely glued to the whole thing. I asked if we should watch the next episode. She said no again, so I ignored her (lovingly) and put the next one on. Again, she was glued and participating! By the next episode there were no protests at all.

The show follows the same old format as my beloved Playschool. With the toys, story time, crafts, etc. Its just a bit more modern, with animations as well. The real life clips were really neat, and engaging too. By the end of it, my daughter had constructed a few puppets inspired by the DVD and had several story ideas for new art as well.

So despite the slow start on the interest front, this was actually a winner both for her and me. We'll definitely be watching this again and again.

Just the Smegs is an unmissable chance to look behind the scenes of the Red Dwarf universe and witness the cast and scenery fall part.

SMEG UPS:
Kryten (Robert Llewellyn) the 4,000 series sanitation mechanoid, takes you on a journey into a dimension of fluffs, bloopers, hitches and smeg ups that lead to one inevitable response: "Cut!" A dimension where the crew forget their lines and giggle uncontrollably, where props fall apart ... more...