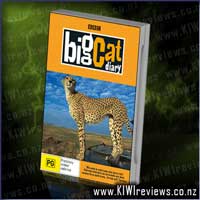 In the heart of Kenya's magnificent Masai Mara, three specialist wildlife teams observe the daily lives and adventures of Africa's big cats. The focus is on induvidual families: a pride of lions, a cheetah mother and her cubs, and the elusive leopard. A very personal relationship develops between the humans and animals as the filmmakers record their daily routines and ups and downs. The unfolding stories are intercut into a compelling story of life in the wild, the struggle for survival, battles over territory, the search for food and shelter and the perils of raising cubs with predators all around. These unmissable big cat adventures presented in stripped, soap opera-style storytelling promise high-octane action.

Ahh, the big cats!!! By far, my favourite animal family, which made this documentary series a definite must have. When I first started watching Big Cat Diary, I found it annoying how they seemed to spend far too much time focusing the camera on the people making the documentary, instead of keeping it purely on the cats. However, after a while I became enthralled in the day-to-day lives of the individual cats and it stopped bothering me so much. If anything, I ended up enjoying the commentary of 3 "cat experts" (Simon King, Jonathan Scott and Saba Douglas-Hamilton) as it was quite interesting, and throughout the series, I found myself often caught up in their emotion as well, as they showed the cats hunting, cubs playing and spending time with their mothers, and the different perils the cats faced with living on the African plains. There were many "awww" factor moments, especially with the main lion, cheetah, and leopard all having cubs, along with a few chuckles along the way- having a wild cheetah poo and pee on you through the top hatch of the jeep is not an experience many people could claim they'd had, but Simon King certainly didn't seem to mind!!
Watching the excitement and fear, for the cats, on the faces of the team filming the animals as danger was faced time and time again, and prey was hunted, etc, it was really easy to see that the experts and their crew genuinely cared for the animals. It would have been so hard though, being there, watching the animals you've become extremely fond of during the filming enter some dangerous situation, and not be able to do anything to help them out, needing to let nature take its course. This was hard enough just watching it on the dvd, nevermind being there- especially when it came to the cubs. The filmmakers had this annoying habit of taking a break in filming right when the action was happening - so that you're sitting on the edge of your seat, wondering if these poor cats are going to survive whatever danger they've gotten themselves into this time, and the credits start rolling!!! This was even worse when it was the cubs in trouble! Grrr!! Made me think of daytime soap operas!! LOL!! But at least it's a good way of getting the viewer to hang around for the next episode, wondering if there will be a cat or two less this time round.
What I found really great, was how they went back about 11 months later to catch up with the cats, and their cubs. It was good to be able to see what happened to the cubs, how (and IF) they grew up etc.
If you like animals, especially big cats, then you will love this documentary. My 7-year-old son, who normally won't even give stuff like this a second look, not only sat down to watch it, but then went and asked me a few days later if we could watch it again!!! A good addition to any animal lover's collection.

As the Apocalypse grows closer, threatening to turn Earth into a battlefield soaked with human blood, Sam, Dean and Castiel struggle agains daunting odds. New foes arise, including the Four Horsemen of the Apocalypse. Old friends depart, consumed by the fearsome wrath of Hell. Through it all, the Winchesters are targeted by demons and angels alike, who warn that each brother has a special and terrible role to play in the coming devastation. ... more...