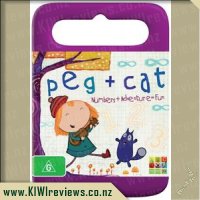 Peg + Cat is an animated series that follows an adorable spirited little girl, Peg, and her sidekick, Cat, as they encounter unexpected problems that require fun and creative solutions.

In order to solve the problems, Peg and her Cat must add, subtract and apply basic arithmetic. When someone leaves the chicken coop open and the chickens run a muck, it's up to Peg and Cat to get 100 chickens back in the coop before the farmer sees. Includes 8 episodes.

I hadn't heard of Peg + Cat before, but I was intrigued by what it might be and as my youngest loves cats I thought I would get this to watch with her. She immediately enjoyed the opening song, and sat transfixed to screen for quite some time. This show is specifically about maths, numbers, and problem solving.

The illustrations in the background of most of the scenes are of maths grid paper and equations. Even when they are in outer space, the black of the sky has equations in it. I thought that was really neat and helped to normalise the use of grid paper and seeing equation workings like that. The characters then play out their adventure on the paper.

The adventures are great, each one was funny and entertaining for Miss 2 and myself. I found myself desperate to get my eldest to the screen too, but she was a bit busy at the time. Still I am definitely going to get her to watch it, as I think having her think about maths in that problem solving way during the school holidays would be ideal.

Peg gets stressed out at the size of the problem, and has to count backwards to calm down. They skip count in 10s and don't get afraid to talk about 100. They talk about fractions and portions of things, shapes and patterning. So all great pre-school maths skills. As they go to Primary, skip counting is the new multiplication and there are a lot of great skills being practiced on this DVD that would really help any kid preparing to start school. In that first year, they do lots of backwards and forwards counting to 100. Counting on is addition and backwards counting is subtraction, which is why it's important to get kids use to those concepts early.

As you can probably tell, I really rated this show. It was fun, it kept my 2 year old interested and she did try counting with Peg and Cat. Though her counting is a little hit and miss, it was good that she was engaged and wanted to learn.

The character-driven toon chronicles the nautical and sometimes nonsensical adventures of SpongeBob, an incurably optimistic and earnest sea sponge, and his undersea friends.

Dwelling a few fathoms beneath the tropical isle of Bikini Atoll in the sub-surface city of Bikini Bottom, SpongeBob lives in a two-story pineapple. Instead of taking the logical approach to everyday challenges, SpongeBob approaches life in a wayward and ... more...