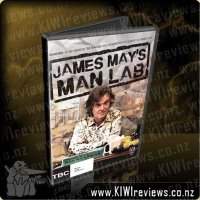 MANKIND: 10,000 years in the making. One generation to completely mess it up.

James May is on a mission to save modern man. 10,00 years of endeavour in science, the arts and humanities, and within one generation man has been reduced to a feckless, bedwetting, parmesan shaving imbecile who revels in his own uselessness. Something has to be done.

James May is the man to do it, by exploring the world as it was, and the world as it should be, complete with it's own bar, private cinema, and electric train toilet-paper delivery system. On the way, he'll learn about bomb disposal, how to build a kitchen (and a rocket), duel with postols and swords, conduct a band of long-retired Grade 1 musicians, and much much more.

This was a bit of a hoot really. After having this returned to us, it was one of those "who picks the fat kid" situations that always seemed to arise in intermediate school, where the chubby chap was always the one standing there waiting for ONE of the teams to PLEASE choose him so he didn't have to sit the game out on the benches. I drew the short straw and was given the task of watching this...

DAGNABBIT I am glad I did.

Some of the antics were a little silly (Spot the huge number of bad continuity gaffs and editing cuts) but the show overall was brilliant in that dry, British wit kind of way that I really enjoy as a descendent of strong Colonial stock raised on The Two Ronnies, Dick Emery, Monty Python and Billy Connolly.

Interspersed with the silly stuff was some great "Manly Knowledge" - like how to make a stunning kitchen bench top out of concrete, how to "Man Up" the toilet so you never run out of loo paper, how NOT to deal with any unexploded bombs ytou may discover in your back yard in England (OK, that one, not so handy for us Kiwis) and "Conflict Resolution" the old fashioned way. I tell you, there would be a lot less antisocial behaviour if we dealt with it by dueling!

Overall, though this will have a limited appeal to anyone NOT having a strong British connection, it's still got some fun stuff with big-boy versions of many things. I am now officially inspired to one day build my own classy bar, and maybe even home theatre that really is a theatre in the home, not just some extra speakers plugged into the TV.

The WotWots are two fluffy alien adventurers who have landed in a local zoo and want to learn all they can about the animals who live there.

They discover all kinds of things in these eight adventures. They find out that some animals are good at hiding and that not all creatures have spots like them. They even discover that some creatures don't have soft fur at all - they have prickly spikes instead!