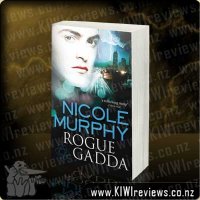 Asarlai has let loose one of the most dangerous Gadda who has ever lived. As she regains control of her plans, she finds a powerful ally and the pressure builds to stop her and retrieve the Forbidden Texts before she can change the world forever.

Hampton Rourke has always lived under his father's shadow, and he's not convinced he's the right man to be leading the search for Asarlai and the Forbidden Texts. When the clues lead to Boston and he stumbles upon one of the fabled lost families, Hampton faces challenges that will test his faith in himself.

Charlotte Haraldson has been taught to hate the bardria, so it stinks that the man of her dreams isn't just from Sclossin, but is the most powerful of them all. Then she learns that everything she's been taught is lies and she has to find new meaning for her and the gadda.

The old pre-Roman mythos from the British Isles has long been a fascination of mine, so this series has been on my "Oh Yeah!" list since I got hooked in by the first book - Secret Ones. Nicole's ability to take supernatural, mythic, wiccan and scientific ideas and blend them into a coherent whole is nothing short of astounding to me, who is a long-time frustrated author-in-my-dreams.

This story takes up right where Book 2 - Power unbound left off, with all the personal issues between characters still in full force... but where this book differs somewhat is that we get to see more of Asarlai, and get a more in-depth run down on the mysterious father of Lukas. This is where things start to get really, seriously weird. Gadda who know they are Gadda but reject the Powers, Gadda civil war, Murder and Mayhem.... and a betrayal like none ever encountered before, and which would, at first thought, appear to be all but impossible!

My only criticism of this book is the level of, shall we say, adult interaction that pops up. This was something that turned me right off an otherwise brilliant series - the Merry Gentry series by Laurell K Hamilton. If I want to read soft- and not-so-soft-porn, there are far better options out there. I read these series for the magic, not the nookie. After all, if the raunchy stuff is removed, this series would be suitable to a far wider audience.

I could rave on about the characters' depth and solidity, but that's often taken as posey "reviewer-speak" so I will say this instead - I am willing to admit that I was worried this was going to be another trilogy... yet the ending clearly leaves the door wide open for more,and I certainly hope Nicole does explore this strange and wonderful Gadda world some more. It would be a real shame for it to all end here.

Overall, wonderful! Bring on more, please! This was indeed a worthy addition to the series, and leads the reader into a wonder-filled realm of intrigue and danger, love and passion... but even saying that, it's not just chic-lit. It has a solid continuity worth exploring. On a totally unrelated note, we are chuffed as all heck to see our second ever attributed quote on the back cover of this book! But... it's KIWIreviews please, not KIWIreviews.