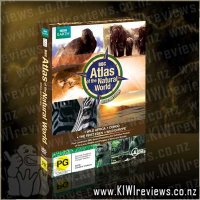 From the BBC's internationally renowned, award-winning Natural History unit comes the second release in this extraordinarily ambitious undertaking, BBC Atlas of the Natural World, a unique survey of life on Earth in all its remarkable richness and beauty.

This six-disc set brings together four landmark BBC series that combine to give one of the most comprehensive portraits of Africa (Wild Africa and Congo), the Mediterranean (The First Eden) and Europe (Wild Europe) ever assembled. In over 12 hours of programming reaching back three billion years, viewers will examine the birth of these vast continents from the dawn of time and examine how the rise of human civilisation has forever changed the landscape.

After watching and totally loving the first "Atlas of the Natural World" series, I was excited to get the second set, featuring Africa and Europe, and couldn't wait to check it out.
This series is just as jam-packed with history, gorgeous scenery, and amazing footage of fascinating flora and fauna as the first series, but this time, there wasn't a single part of it that I didn't thoroughly enjoy, where as in the Western Hemisphere and Antarctica set, I'd found the "Life in the Freezer" disc rather boring, despite being narrated by Sir David Attenborough, one of my all time favourite natural history Narrators. Another favourite narrator of mine, Fergal Keane, made an appearance too, with the "Wild Africa" discs, and John Lynch wasn't too bad either... some narrators can be quite dry and drone on and on, but not any of the gentlemen narrating in this series.
My favourite episode would definitely have to be "The River that Swallows all Rivers" on the "Congo" disc, which showed the HUGE variety of lemurs. I'd never known just how many different types of lemurs there were out there!
These DVDs give an awesome, in-depth look of two of my favourite continents, from Man's intrusion on the land (covered more so, I found, in the Europe discs and "The First Eden" disc than the others) - how we have affected both the land and creatures that live on it, while also showing how mankind and nature have learned to live and work together; to the wide variety of wildlife in each area, right down to even the tiniest of creatures... eg: the fish and scorpions that live in elephant FOOTPRINTS of all places!
Anyone aged 8yrs and older will find at least something in amongst this 6 DVD set to enjoy, or learn new things about the amazing natural world around us. Even the "extra features" are jam packed with more episodes and info, so that it is very easy to spend several hours hooked in front of the tv, lost in what is, by far, one of BBC's best natural history series yet! Animal lover or not, this is definitely a set that is well worth having in the DVD library, especially if you have kids!

Matt Smith returns for his third series and final series as the Eleventh Doctor. Thirteen big, blockbuster-movie episodes, plus a Christmas Special - each a brand new epic adventure featuring new monsters and some familiar foes as ... more...