The Void : 3 : The Evolutionary Void review 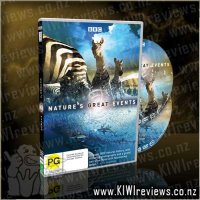 Using state of the art filming technology and narrated by Sir David Attenborough, Nature's Great Events captures the Earth's most dramatic and epic wildlife spectacles and the intimate stories of the animals caught up in them.

From the flooding of the Okavango Delta in Africa, to the great summer melt of ice in the Arctic and the massive annual bloom of plankton in the northern Pacific Ocean, each programme features a different event set in one of the world's most iconic wildernesses.

Witness tiny grizzly bear cubs emerging from their den in snow-covered mountains, baby elephants struggling to survive against drought, a lion attack in Africa, humpback whales hunting as a team, the world's largest concentration of dolphins and sharks gathering off the coast of South Africa; plus polar bear families navigating their precarious way on thinning ice.

Combining the epic cinematography of Planet Earth, with all the emotion, intimacy and storytelling of a wildlife diary, this dramatic series charts the effects of seasonal changes which each year transform parts of the planet, drawing in thousands of animals and determining their fate. But who are the winners and losers of Nature's Great Events?

Special Features:
•  Six ten minute making of featurettes - one to accompany each programme.

•  As seen on TVOne
•  Also available on Blu-Ray

Sir David Attenborough once again leads viewers on a stunning visual journey, filled to the brim with information, through our fascinating natural world, this time focusing more on the big events that happen in nature than the animals or locations themselves.
The music is thoroughly enjoyable and fitting to the episodes, without interfering at all with Attenborough's narration, and each episode has its own "hard hitting" moments (for the softies like me.. so just be careful if watching with younger children), where it really brings home the "survival of the fittest" rule.. eg: a lion cub, lost and crying, left behind by its Pride because it was so hungry it didn't have the energy to keep up (this one nearly made me turn the tv off, it was that hard to watch), and the dying moments of a young Gannet after its first flight where its crash landing did too much damage for it to survive.

The 1st episode, "The Great Melt", would've definitely been one of my favourites in the series. Watching an enormous polar bear trying to haul himself out of the water, after walking on the Winter ice which SHOULD have been plenty hard enough to be safe, yet turned out to be much thinner than usual, and therefore very easy to break, was absolutely heat breaking! Definitely an episode that hit home hard about how much our world and the climates are changing, plus fascinating footage of 2 animals I have hardly seen any dvds on... Narwhals and Belugas.

Each episode is followed by a "diary", showing behind the scenes of that particular episode, some of the challenges faced with filming it (the grizzly bears and camera cables are NOT a good combo! LOL!), and the lengths they went to in order to solve these challenges. I found this to be a great added extra, especially with my own interest in wildlife photography, and is something I wish they'd do with a lot more nature DVDs!

This 2 disc series is definitely worth having in the collection, and is a good example of just how our world is changing and affecting the wildlife within it, and why we need to start working to look after it a lot better.

In their latest adventure, The Wiggles Go Bananas! The fab four of fun have recorded some of their catchiest and most infectious songs to date. We jump into the heart of the groovy animal kingdom with songs such as Monkey Man, Kangaroo Jumping, Tasmanian Devil and Tiger Man. Along with Australia's John Waters (singing Rusty the Cowboy) and Ireland's Morgan Crowley singing The Unicorn. So jump into the jivin jungle with the kings of pre-school swing, as The Wiggles Go Bananas