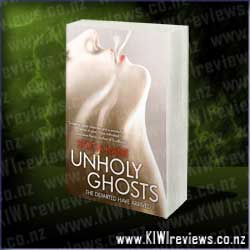 The Afterlife is only the beginning!

The world is not the way it was. The dead have risen and constantly attack the living. The powerful Church of Real Truth, in charge since the government fell, has sworn to reimburse citizens being harassed by the deceased. Consequently, there are many false claims of hauntings from those hoping to profit.

Enter Chess Putnam, a fully-tattooed witch and freewheeling Debunker and ghost hunter. She's got a real talent for nailing the human liars or banishing the wicked dead. But she's keeping a dark secret from the Church: a little drug problem that's landed her in hot and dangerous water.

Chess owes a murderous drug lord named Bump a lot of money. And Bump wants immediate payback. All Chess has to do is dispatch a very nasty species of undead from an old airport. But the job involves black magic, human sacrifice, a nefarious demonic creature, and crossing swords with enough wicked energy to wipe out a city of souls. Toss in lust with a rival gang leader and a dangerous attraction to Bump's ruthless enforcer, and Chess begins to wonder if the rush is really worth it. Hell, yeah.

I must admit that I was initially hesitant as Urban Fantasy can go either way with me. I picked this book up when I was desperate for an urban fantasy fix and was actually ready to read twenty pages and then give up. However, I was more than pleasantly surprised.

This book sets up a unique and interesting fantasy world that surpassed my expectations. The world building is quite different from the standard Urban Fantasy fare of Vampires and Werewolves. Instead we have homicidal ghosts and the Church of Real Truth protecting the world from ghostly annihilation. For extra brownie points the author begins each chapter with Church of Real Truth quotes, which reminds you of how the church controls perception and behaviour in the world of Chess Putnam. It adds believability to the story and also is creepily reminiscent of history and religion in our own non-fantasy world.

I also fell in love with Chess. She's a powerful church witch with a little, ok significant, drug problem. She's an imperfect mess with epic witch skills. She gets it gloriously wrong in her personal life but still manages to pull off being a believable heroine, albeit a sort of anti-hero. She's such a unique character in the Urban Fantasy genre. I've read many books in the genre and no other author I've read has dared to make their heroine so flawed. I love this angle and it actually drew me further into the story because Chess is just so interesting and broken that you have to watch that trainwreck until it ends.

Add the illegal world of drugs and murderous drug lords and you have the makings of a very well developed alternative reality. I loved the contrast between the world of the Church of Real Truth and the illegal underbelly, which in its own way reflects our own reality, because no world is one dimensional. I think the contrast added depth to the world Stacia Kane built.

Ok, I'm rambling, but I really loved this book. In fact I'm eagerly awaiting the latest instalment of the series to be published. Of all the urban fantasy I've read the Downside Ghost series is one of my top favourites and I can't recommend this book enough to urban fantasy fans. Give it a go, if you're like me you wont be disappointed.

Unholy Ghosts had a pretty cool premise and I was hoping for a 'ghostly' version of True Blood (to which is was compared), but for some reason, I just couldn't get into it. The world was very dark, but imaginative. I liked the noir / grunge approach for the most part and could even handle the horror and gore, when it turned up. It was the character Chess that put me off.

I was warned, I suppose, on the back cover, that Chess has a 'little' drug problem... but when several times per chapter she is depicted snorting, swallowing or smoking some narcotic? I simply didn't feel inspired to like her. Maybe I could feel sorry for her, but I couldn't identify.

This book is the first in a trilogy and I suspect if you are into very dark urban fantasy, you might enjoy this (as long as you don't find excessive drug use offensive). Don't expect the chapters to be peppered with sizzling romance or erotica, however.

Not much else I can really say about this one, except that maybe I am not the target audience.

This is a book about Nature for naughty kids.

Nice kids learn about the life-cycle of the monarch butterfly and tadpoles turning into frogs.
Naughty kids want to know about squashed hedgehogs and dead pukeko.
Nice kids like to look at books with pretty pictures of puppy dogs and kittens.
Naughty kids would rather see blood and guts and maggots.
And rats. Lots of rats. Don't forget the rats.