ProdID: 1176 - The Truth About the Drug Companies
Written by Marcia Angell, M.D 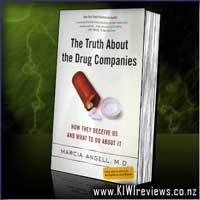 The Truth About the Drug Companies product reviews

The signing of the Free Trade Agreement with the USA has left many Australians feeling apprehensive about the future of the Pharmaceutical Benefits Scheme and the impact this will have upon the price and availability of reliable prescription drugs. For a glimpse of what the future might hold, many are looking to the current state of the industry in America. There, the public have struggled to keep up with spiralling drug prices while the big drug companies have grown rich and gained unhealthy levels of influence over the government agencies that regulate them, as well as the medical professionals who administer their products.

During her two decades at The New England Journal of Medicine, Dr Angell gained extraordinary insight into the truth about the drug companies. She watched them stray from their original mission of developing useful drugs and instead become vast and highly profitable marketing machines with sometimes dubious products.

By focusing on hugely successful drugs like AZT (the first HIV/AIDS medication), Taxol (the best-selling cancer drug in history), the blockbuster allergy drug Claritin, and the arthritis drug Vioxx (withdrawn recently amidst scandal), Dr Angell demonstrates exactly how new products are brought to market, and argues that the pharmaceutical industry need to be saved from itself. She proposes a program of vital reforms, which include restoring impartiality to clinical research and severing the ties between drug companies and medical education.

Written with fierce passion and substantiated with in-depth research, The Truth About the Drug Companies is a searing, best-selling indictment of an industry that has spun out of control.

Former editor-in-chief of The New England Journal of Medicine and now a member of Harvard Medical School's Department of Social Medicine, Marcia Angell, M.D., is an internationally recognised authority in the field of health policy and medical ethics, and an outspoken proponent of medical and pharmaceutical reform. Time magazine named her one of the 25 most influential people in America. Dr Angell is the author of Science on Trial: The Clash of Medical Evidence and the Law in the Breast Implant Case.

I Didn't do it for You: How the world betrayed a small African nation
Rating: 9.3

Phoebe and the Night Creatures
Rating: 9.6

When a book comes out with this title, it is easy to dismiss it as conspiracy theory. When another book is published along the same lines, then perhaps one should sit up and take note. When a doctor, and a former editor of a prestigious medical magazine writes one of these books, then one really ought to listen and take heed.

As a herbalist, I hear about this sort of information almost daily. If a herbalist repeats it, one gets classed as a nut and a conspiracy theorist. Now, I have the information to hand to poke under the noses of the nay-sayers.

The author has conducted extensive research in her persuit to write this book, it contains neither fabrication or fallacy and opens up the truth to the general public of what the drug companies are trying to do just to sell drugs and make even larger profits.

Clearly written in a language that doesn't require too much effort to read (such titles can be a little heavy to read at times) and really is presented in clear narrative with liberal examples of big pharma manipulation. An easy read and one that is essential reading for anyone interested in health.