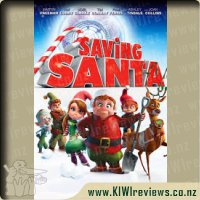 A lowly stable elf finds that he is the only one who can stop an invasion of the North Pole by using the secret of Santa's Sleigh, a TimeGlobe, to travel back in time to Save Santa - twice.

I seen the idea to create a Christmas Eve box for the children on a post on facebook. The idea is to create a box containing a pair of new Christmas pyjamas, a Christmas DVD and book, and some yummy treats and hot chocolate with marshmallows. I knew my daughter would love this and thought it would be a good tradition to start so went for it. Choosing a DVD was pretty hard as my girl has watched so many Christmas movies so when I seen this up for review I jumped at the opportunity who can say no to a cutesy Christmas flick!

Well the movie was a hit we watched early in the evening on Christmas Eve so the kids could go to bed early and it was a nice little movie which left you feeling good ready for a nights sleep. I must admit I was worried to start off with as it seemed quite sad for quite a while and you felt very sorry for the Elf Bernard but it did have a happy ending in the end as all good children's movies should. It was great to see Bernard figure it out and get things right after a number of mistakes throughout the movie.

I loved the character Bernard he was such a clever elf who had such great intentions yet his ideas weren't always as well thought out as they should be. So for him to end up saving the day and being the Christmas hero was really heart warming. His invention was the reason that the secret identity of the North Pole was uncovered and the invasion was in a way his fault although unintended. His inventions were so clever and would be great with just a few tweaks he really was pretty special.

I didn't like all the singing but that is pretty stock standard for children's movies so was nothing I wasn't expecting. I think that is the bit my children liked the most and it does give the movie that emotional connection as you listen to Bernard singing when he is sad and when he thinks he's got it all figured out. It also got us thinking about what our Christmas memories are as we see Bernards Christmas spirit invention that has characters seeing flashbacks from Christmas past.

And that is what in the end saves the day Christmas spirit as the bad guy is softened by Christmas memories of his own and the secret of Santa's sleigh is kept safe once more.

It's not that he's clumsy, shy or dressed for disco that makes Dave Ming Chang different from everyone else in New York City. It's that he's an alien. More accurately, he's an alien spaceship, on a mission to Earth to save his home planet.

Torn between the voices in his head - a tiny alien crew led by a high-strung miniature version of himself - and the world around him, Dave struggles to appear normal. But when he falls for an Earth woman, the consequences are hilarious in this clever comedy.