The Book of Tomorrow review 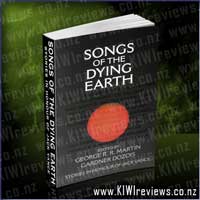 Stories in honour of Jack Vance

Return to the unique and evocative world of The Dying Earth in this tribute anthology featuring the most distinguished fantasists of our day. Here are twenty-two brand-new adventures set in the world of Jack Vance's greatest novel.

A dim place, ancient beyond knowledge. The sun is feeble and red. A million cities have fallen to dust. Here live a few thousand souls, dying, as the Earth dies beneath them. Just a few short decades remain to the long history of our world. At the last, science and magic are one, and there is evil on Earth, distilled by time! Earth is dying.

Half a century ago, Jack Vance created the world of the Dying Earth, and fantasy has never been the same. Now, for the first time, Jack has agreed to open this intriguing and darkly beautiful world to other fantasists, to play in as their very own. The list of twenty-two contributors eager to honour Jack Vance by writing for this anthology includes Neil Gaiman, Tad Williams, Elizabeth Hand, Tanith Lee, Dan Simmons, Robert Silverberg, and George R.R. Martin himself.

Tilly and the Bookwanderers
Rating: 7.3

I admit, despite having spent most of my life reading Sci-Fi from a wide range of genres and authors, I have never read much in the way of Jack Vance's work. With such a huge menu to choose from, it has been difficult to sample everything out there. However, this collection has made me wonder just what I have been missing.

These authors have all payed ample hommage to a great fiction author, that much is clear, and from the style of the stories they have all tried to keep their tales not only in line with Vance's "Dying Earth" world, but also his style of writing, with the almost courtly language at once highly descriptive and flowery, very remiscent of Shakespearian prose. There's something astounding hearing a character you could almost expect to hear on a stage spouting MacBeth, describing a multidimensional being something like a cross between an orca and a squid, battling a sentient carnivorous tree.

With each story being satisfying yet still reasonably short, this book holds many hours of enjoyable reading. Not all tales will suit all tastes, of course, with one or two a tad slow and predictable for me, yet overly balanced by many more being utterly enthralling. I had trouble putting this book down, leading to a couple of missed bus stops and some extra walking... which worked out fine for me, as I long ago learned to navigate urban areas with my nose stuck in a book, so it was a great chance to cram another chapter into my eyes.

Overall, a great addition to any fantasy or fiction fan's library. I would class it more as fantasy, in that there was not much in the way of uber-science, and a heck of a lot of what can only be described as magic. Mind you, as Arthur C. Clarke once said: "Any sufficiently advanced technology is indistinguishable from magic." He may just be right in that... Full of authors any sci-fi or fantasy buff will recognise, so bound to be something to attract the wandering eye of this class of reader.

This cute little kitten has just one wish for Christmas-she REALLY wants a hippopotamus! How will Santa get this present under the Christmas tree? He's going to need a bigger sleigh!

I Want a Hippopotamus for Christmas was originally released in 1953 by 10-year-old Gayla Peevey, and was an instant hit. The song has been an enduring Christmas favourite ever since