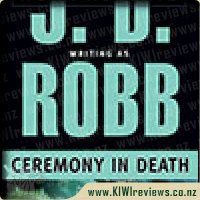 Even in an age of cutting-edge technology, old beliefs die hard...

Conducting a top secret investigation into the death of a fellow police officer has Lieutenant Eve Dallas treading on dangerous ground. She must put professional ethics personal loyalties. But when a dead body is placed outside her home, Eve takes the warning personally. With her husband, Roarke, watching her every move, Eve is drawn into the most dangerous case of her career. Every step she takes makes her question her own beliefs of right and wrong - and brings her closer to a confrontation with humanity's most seductive form of evil...

This book is different from the others , as one of the victims is a police officer and as you get further into the story you start to understand the reason he was murdered. The subject matter was slightly disturbing and some was rather graphic. I would read the book again but not for a while due to the graphic nature of the story. It goes against my beliefs but I can still admire a well written story, the ending was a bit unexpected. I thought I could see who the murderer was and why but I didn't see that huge twist.

We learn a bit more about Peabody and her history. Sometimes it is surprising how well she gets on with Eve since they are so different in personality and ways of getting the job done. I'm hoping to find out about some of the other regular characters as the series progresses.

The stories are mostly easy to read and I can manage to read one book a day without too many problems and I am fine ding that at the end of each book I really want to get into the next one which is unusual for me as I normally need a break and a change of subject and read a totally different book from the one I have just finished. Really looking forward to the next book.

In this book the investigation involves Dallas in the murky world of Satanic ritual murder. Most of the interest in the crime part of the novel lies in the confusion between one group and another, particularly between completely legitimate Wiccans and black groups masquerading as Wiccans. Without witness evidence, it is virtually impossible to tell the difference between pretence and reality, particularly for an outsider like Dallas. And when witnesses contradict each other, and get killed, it's hard for the police to know who is doing what.

While Ceremony in Death has some very unpleasant scenes, it is well written, neither seeming patronising to someone who knows a fair amount about the occult nor difficult to follow for someone who barely has heard of Wicca. The mystery is not difficult to solve but getting the evidence to prove it makes this a hard case for Dallas.

Because there's a cop involved in the first two deaths, Dallas is ordered by the Commissioner not to discuss her investigation with anyone, which causes some friction between her and some of the other regular characters in the series. Dallas's relationship with Roarke continues to develop in this book, the two of them have some great moments as they both get used to being married and opening up to someone else. Also further developed in this outing is Eve's assistant, Peabody who is a great character on her own, as well as an excellent counter-point to Dallas' no-holds-barred intensity.

Fourteen-year old Amy Cahill and her younger brother Dan thought they could return to their regular lives after they found the 39 clues that safeguard their family's great power. But they were wrong.

Powerful enemies - the Vespers - have been waiting in the shadows. And they'll stop at nothing to grab the Clues.

Four powerhouse authors unit to expose the 500-year old secret struggle between the Cahills and the ... more...