« Marvel Guardians of the Galaxy Vol. 2: The Novel review 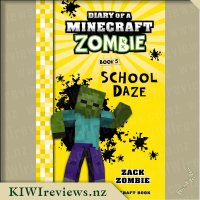 But when his scare-cation is threatened by the dangers of going to camp, Zombie has to come up with new ways for his parents to change their minds. Maybe if he failed a few classes, his parents would ground him ... then he could spend all scare-cation playing video games and eating cake!

But it turns out failing a class at mob school is a lot harder than he thinks. Will he be able to fail any of his classes or will he spend all scare-cation eating horrible camp food?

Mr Four loved this book! He will be starting school when he turns five in July, so any story set in a school has immense appeal for him. His older sister (Miss Eight) already goes to school, of course, and she was quick to assure him that the school in this book would be nothing like the local school that she attends. Their older brother (Mr 13) is into Minecraft but neither Mr Four nor Miss Eight is familiar with the game - however, this did not affect their enjoyment of the story.

The front cover features a Minecraft zombie, and the illustrations scattered throughout the text also feature Minecraft creations, but the story could actually apply to any youngster faced with having to do something his parents want him to do when he would really prefer to be doing something completely different. Mr Four thought it was really funny that he did not want to go to camp. He went camping with his own family over the summer, and can't wait to do it all again.

Staying home and playing video games while eating cake did not sound like fun either - Mr Four is all action and would far rather be out jumping on the trampoline or playing beach volley-ball. He could not understand why Zack was trying so hard to stop his parents from sending him away. At the same time, he thought all the attempts at sabotage were hilarious even though they did backfire. He loved the idea of black measles, but decided it probably was not a sensible thing to do!

Miss Eight, who had been hovering while we were reading the book, said she thought she would read it herself. She liked the idea of being assessed in Scaring - she thought it would be a seriously fun skill to have and would like to study it! I had thought the book would be too young for her, but she had heard enough in passing to decide she would check it out for herself later.

Mr Four's favourite part was when Zack saw his yearbook photo and realised he looked like a human! We had been talking about the different kinds of people in the book - humans, witches, skeletons, and (of course) zombies - and Mr Four said very firmly that he was a Boy! Well, fair enough ... he knows what he is. When we had finished the book and Miss Eight came to grab it, Mr Four told her sternly that she could wait as we were going to read it a second time. Praise enough from a not-for-much-longer-pre-schooler.

Michael Cunningham's luminous novel begins with a vision. It's November 2004. Barrett Meeks, having lost love yet again, is walking through Central Park when he is inspired to look up at the sky; there he sees a pale, translucent light that seems to regard him in a distinctly godlike way. Barrett doesn't believe in visions - or in God - but he can't deny what he's seen.