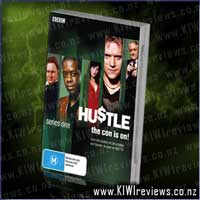 A slick and sexy drama from the makers of Spooks and Life on Mars.

Hustle is an action-packed blend of humour and intrigue that follows the fortunes of a gang of 5 expert con artists let loose on the streets of London. They are specialists in the ways of the grafter and long-con, and are keen to liberate cash from the amoral and undeserving.

Released after doing time for allegedly beating his wife's lover, Michael Stone, aka Mickey Bricks, plans to carry out one last con before going into retirement. He brings together his expert crew of 'ethical thieves'; his mentor Albert Stroller - an old-time master of con-artistry, technical wiz Ash Morgan, streetwise seductress Stacie Munroe and the newest recruit, the eager-to-learn Danny Blue.

The team's ethos - only the morally corrupt can be conned - brings to light a multitude of unsuspecting targets: a wealthy businessman who is lured into a seamingly foolproof high-return stockmarket investment, a greedy art dealer who vies for a recently discovered lost painting, and a brutish casino manager who finds temptation to invest in films too hard to resist.

Get ready to relish in the art of the Hustle!

Contains the Episodes:
•  The Con Is On
•  Faking It
•  Picture Perfect
•  Cops and Robbers
•  A Touch of Class
•  The Last Gamble

I ran across this show part way through series 2, and was instantly captured by it. It's not about being drawn to the crime... it's about appreciating the degree of planning, the side-spins that make it work, the 'rolling with the punches while keeping your eyes on the prize' attitude... and just 'getting' the style required to pull such stunts off. And let's face it, there's a little Robin Hood in most of us... these guys even do the last bit too, giving to the needy.

The characters are brilliant, and well suited to their roles. Mickey's the brains, the key man who works out the con. Albert is the 'senior man', the one who keeps an eye on things and hooks the mark. Stacie is both beautiful and smart, able to turn a head... long enough top pinch the wallet. Ash is the go'fer, the one who gets what the team needs, be it hotel rooms, cars, crew, willing mugs. And finally Danny is perfect as the street-smart short-con wiz who wants to get into the big time with his own ideas for cons. Together, they form a team that is better than the sum of it's parts. Faster than a mark's mind, stronger than superglue, able to pull a long-con in a single bout, this is Mickey Bricks' Crew.

All six cons were new to me, since I missed seeing series 1 on TV, but the style and elan were oh-so-familiar from what I had seen, and it was great to see the team as it grew together, as it became the team I knew from later shows. If I had to pick a favourite team member it would have to be Ash. The man is my hero... resourceful, fast in a pinch and able to think on his feet... just the sort of attitude we all need these days just to survive. OK, how he applies his talent isn't exactly in line with common ethical guidelines, but you have to admire someone who can get what is needed... kind of like an anti-MacGyver.

Overall, this series really is for those with a taste for dry British wit... there's no slapstick, no pie-in-the-face, just pure, thoughtful wit. The punchline isn't in the face, it's in the hindsight. The last 5 minutes of each episode quickly takes you back to show you the important bits, the bits that have the 'twist' and the ways the con fell together. It's the sneak peek behind the magician's curtain, and it is by far the cherry on top. For those for whom this style is appealing, then this is going to be a brilliant addition to their library. For those who prefer a more Americanised humour, then this might still have an appeal, but I doubt it.

Score: 10.0
Product reviews for listing 6596: An Evening with the Modern Maori Quartet -  Performed by

An evening with the Modern Maori Quartet is a celebration of humour and heavenly harmonies. James Tito, Matariki Whatarua, Maaka Pohatu and Francis Kora are handsome and well dressed they're all swagger and suave with a fine sense of comic timing and cheeky charm.

These modern men play homage to the Maori showbands of old, working the audience with Waiata and wit, and guitars in hand.