« The Magic Circus of Samoa review 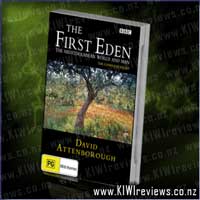 Written and presented by Sir David Attenborough, The First Eden is a glorious portrait of the landscape, wildlife and plants of the Mediterranean. The four-part series is an excursion to the Mediterranean detailing the long history of mankind's relationship with this incredible environment. From the earliest human settlements to the cities of today, from the deserts of North Africa to the forests of southern Europe, this series tells the dramatic story of man and nature at work.

Sir David examines Mediterranean man's changing attitude toward the environment and the efforts undertaken to reverse environmental damage. He also investigates the effect of centuries of war and the transformation of the land due to human migration and the growth of trade in medieval times.

Learn about the exotic flora and varied wildlife, as a very eager guide reveals, amongst other things, the bones of pygmy elephants in Malta, live toads in Majorca, and a million or so moths in Rhodes. See this popular landscape in an entirely new light in this double DVD and be beguiled afresh by a grand master of natural history film making.

I have always been a great fan of Sir David and his revealing documentaries. They have always captured my attention and never failed to teach me something new. This is no exception to that rule.

With stunning cinematography and informative and probing narration, Sir David is never afraid to get into the scenery wherever possible. Watching him abseiling down a cliff-face into a subsurface waterway to give us a close-up view of some of the rarest frogs in the world, for example, really brings home how much he loves this planet... and how much we should care about it too.

Packed with contemporary and historical information about the land, the people and the events that shaped the region, there really is something in here for anyone who enjoys stretching their cognitive muscles.

Sir David has been around for many years, educating and illuminating our world for us, and it's great to see the older docos making there way into new storage media... hopefully we can use these to show our children what this planet is all about, to prove to them that it is a lot bigger than the homes, playgrounds and schoolyards that are all they know for so many of their formative years. If all else fails, these docos are going to be a lasting testament to what we once had and casually destroyed.

Overall, yet another stunning addition to the library for any earth-wise viewer, aficionado of learning-for-the-sake-of-learning, or just Wednesday Night Trivia Nite player. There is always something new to learn, and the best bit is that no matter how many times you watch these, you'll still pick up something new you overlooked last time.