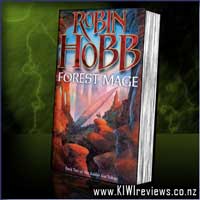 The King's Cavalla Academy has been ravaged by the Speck plague. The disease has decimated the ranks of both cadets and instructors, and even the survivors remain sickly. Many have been forced to relinquish their military ambitions and return to their families to face lives of dependency and disappointment.

As the Academy infirmary empties, Cadet Nevare Burvell also prepares to journey home, to attend his brother Rosse's wedding. Far from being a broken man, Nevare is hale and hearty after his convalescence. Ha has defeated his nemesis, Tree Woman, and freed himself of the Speck magic that infected him and attempted to turn him against his own people. A bright future awaits his as a commissioned officer betrothed to a beautiful young noblewoman.

Yet his nights are still haunted by dreams of the voluptuous Tree Woman, dreams in which his Speck self betrays everything he holds dear in his waking life. Has the plague infected him in ways far more mysterious than the merely physical?

Despite his fears, Nevare will journey back to Widevale in high spirits, in full expectation of a jubilant homecoming and a tender reunion with his beautiful fiancée, Carsina. But his life is about to take a shocking turn, as the magic in his blood roars to life and forces him to recognize that he most dangerous enemy, an enemy that seeks to destroy all he loves, might dwell within him.

Create Cards and Calendars using Your Own Digital Photos
Rating: 9.5

I waited patiently - well sorta - for this book, and was not disappointed with it when I did get my hands on it... Never have I been disappointed with a Robin Hobb book, and this was no different. I was delighted, intrigued and pulled into the growing magic of this book... much like Nevare's growing size!!!
In fact those are linked... but we will get to that in a bit...

Nevare's life changes greatly during the course of this book. We start mere weeks from the end of the first book when Nevare receives word from his father that he is to return home for his brother's wedding. Nevare is still recovering from the Speck plague, though his recovery is entirely different from most of his Academy classmates who are wasted away - in fact Nevare is putting on weight that doesn't match what he is eating, and he can't seem to stop it...
The Doctor at the Academy documents this anomaly and sends Nevare off home with a promise that he will keep him apprised of his physical condition.

Upon arriving home, Nevare is confronted with his appearance when his family react with shock, dismay and disgust - particularly his father, who blames him for being undisciplined and gluttonous... Nevare goes through many spirit breaking experiences during his time at the family home, near starvation in an attempt to lose weight, the loss of his fiancee, the ravages of the Speck plague on the community around him, and his father's continuing inability to see that what is happening to Nevare isn't of his making...

Disheartened and still growing in size, Nevare re-enters the world and heads west towards the forest, the Specks and a growing knowledge about what is happening to him, and how he will affect the Gernian way of life if he gives into the magic that grows within him as he grows in size...

There are many emotions that Nevare goes though over the rest of the book including love, lust, shame, wonder, disbelief, rage...

But eventually, he gives into the power of the magic and in doing so changes his life forever!!!

I look forward to reading the concluding book in this series and know that Robin Hobb will do an admirable job of completing Nevare's story...

Another sterling effort from the authoress!!!

Score: 9.5
Product reviews for listing 7366: How To Hide A Lion At School -  Author: Helen Stephens

Lions aren't allowed at school, but Iris's lion doesn't want to be left behind. He even stows away on the school trip to the museum, causing much madness and mayhem as he hides among the exhibits. But when the school bus breaks down, it's time for the lion to be a hero. He leaps to the rescue, and carries all the children home on his back.