« Trouble and the Missing Cat review 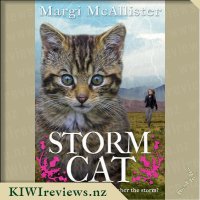 Fourteen-year-old Libby is hardly thrilled to find herself stuck on a highland holiday with her mum, her mum's new boyfriend and his young son, Cam. With her mum behaving like a teenager, and Cam sulking, a trip to the wildlife park is the only thing that animal-loving Libby is looking forward to!

But when Libby and Cam get lost in the wilderness, the snow becomes a blizzard, and they stumble across an abandoned wildcat kitten, suddenly a fun day out turns into a life-or-death situation. Can Libby keep the kitten alive against the odds?

This is one of those books that is quite satisfying to read - it has a blended family in the making, a helpless animal, an adventure which is seriously challenging if not downright scary, and some delightful descriptive passages which come alive for the reader as they evoke a whiteout in the Scottish Highlands and the sheer terror of experiencing the first symptoms of incipient hypothermia.

I found the book very easy to read, partly because I have experienced first-hand the impact of being caught in a whiteout myself (although not in Scotland), and partly because I have also been involved in the rescue of a small wild animal and subsequently hand reared it. These prior encounters made me question as to whether I was enjoying the book for its own sake, or just because I had prior experiences of some of the events. Because of this, I asked Mr Seven (who was at my friend's house when I called) if he would read it too.

Mr Seven is not a natural reader, but his mother read it with him, and five days later they called round to give me their feedback. He is into animals, so this aspect of the book really appealed to him. He liked the way that Cam was a year younger than he is, and commented that he would probably have coped better in this situation as he was much older and more independent! He did say that he would like to read the book again, this time on his own, so that is praise indeed from a child that is not into reading.

For myself, I thought it was quite a sweet story but I did think the character of Libby was rather too perfect. I don't know many girls of 14 who would be as patient when left in sole charge of a difficult six-year-old, especially as she had been an only child and had her mother to herself for most of her life. Not only does she have to cope with his eccentricities when he is being "funny little Cam", but she also has to watch as he bonds with her mother. There is no sign that she resents his making himself part of her family group.

So - I loved the story as did Mr Seven. I enjoyed the way the Highlands were presented as a huge nature reserve where endangered species can survive and humans are actively working for their preservation. I loved the way that Cam interacted with Libby and the kitten. I just have reservations about Libby's character. Not so Mr Seven - he accepted her attitudes as being only what might be expected from an older child towards a younger one. There again, he is an only child too.

Score: 9.0
Product reviews for listing 2083: The Chimpanzee Book - Apes Like Us -  Written by Dr Carla Litchfield

They look cute and cuddly but don�t underestimate them � our closest living animal relatives use tools to hunt, can hold a grudge and can even use computers to communicate. From Dr Carla Litchfield, conservation psychologist, and with a seal of approval from Dr Jane Goodall.