« I Didn't do it for You: How the world betrayed a small African nation review

ProdID: 1022 - The Great War for Civilisation
Written by Robert Fisk 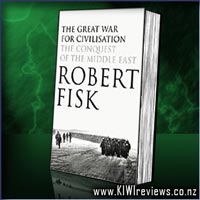 Disclosure StatementFULL DISCLOSURE: A number of units of this product have, at some time, been supplied to KIWIreviews by the company for the purposes of unbiased, independent reviews. No fee was accepted by KIWIreviews or the reviewers themselves - these are genuine, unpaid consumer reviews.
Available:
Available at all Good Bookstores

Rarely have first hand reporting and history been so powerfully combined than in Robert Fisk's epic story of tragedy and betrayal in the Middle East. As his narrative of bloodshed and cruelty unfolds in Iraq, Afghanistan, Algeria, Iran, Palestine and other battlefields, the carnage of September 11th, 2001, and the other throw of Saddam Hussein's brutal regime take on a new and frightening meaning.

Fisk, who has met Osama bin Laden three times, has been on the battlefront of the Middle East's conflict for 28 years and his devastating accounts of human suffering are now read around the world. In the tradition of all foreign correspondents, his eyewitness testimony of the horrors of modern warfare - in the tradition of the great reporters of the Second World War - is laced with both suspicion and anger.

This is no chronology of Middle East history but a passionate outcry against the lies and deceit that have sent soldiers to their deaths and killed tens of thousands of men and women - Arab, Christian, and Jew - over the past century. It is also a chronicle of journalists at war, of the rage, humour and frustration of the correspondents who spend their lives reporting the first draft of history, of their occasional courage - and sometimes their deaths. It is also a deeply personal memoir which moves from Fisk's own presence on the front line in the Iran-Iraq war in the 1980s to the experience of his father, 2nd Lt Bill Fisk, in the trenches of the Somme in 1918. In the months that followed the First World War, the victors drew the borders of Northern Ireland, Yugoslavia and much of the Middle East; Robert Fisk has spent his entire career watching people within these borders die.

The Great War for Civilisation - the legend on the back of his father's 1914-1918 campaign medal - is a masterpiece of adventure and tragedy, softened with both humour and compassion. It is the story of the violent world that is shaping our lives - and our future.


Best-selling author and journalist Robert Fisk, based in Beirut as Middle East Correspondent of The Independent, has lived in the Middle-East for almost three decades and holds more British and international journalism awards than any other foreign correspondent. His last book, Pity the Nation, a history of the Lebanon war, was publishing to great critical acclaim.

The Book of God and Physics
Rating: 9.0

Tales of the Blue Jade 2 -The Mapmakers Apprentice
Rating: 10.0

There are few places in the world more interesting than the Middle East, and fewer still that are more dangerous, more complicated and have greater bearing on world politics. For around 100 years the West has been controlling, manipulating and grinding down the Middle East, and on September 11 2001 the rules of engagement changed.

There are few, if any Westerners who have the knowledge of the Middle East that Robert Fisk has. For over 30 years he has been a reporter; first for The Times, and then when they impeded on his journalistic integrity by censoring his work he moved to The Independent. For over 30 years Robert Fisk has been telling the world what is happening in the Middle East with clarity, integrity and insight.

But this is no dry, academic treatise, this book is the gripping account of wars, political machinations, deception and betrayal. Despite being nearly 1300 pages long I read this in little more than a week. I was with Robert Fisk when he carried a Kalashnikov as the passenger in a Soviet army truck in Afghanistan in the 1980s. I heard the bullets whistle past him as he ran across a bridge in the Iran/Iraq war and I sensed his horror as he penned the response to the attacks on the US that resulted in his widespread condemnation and criticism.

This book is well researched, accurate and extremely readable, and if global politics are at all an interest I can't reccomend it highly enough.

When my teacher Mr Fullerman doesn't have his BEADY EYES on me, I like to draw pictures and write stories about stuff, like when we had the worst holiday ever and when my parents came to school for parents' evening. All I want to do is get tickets to see the best band ever - DUDE3 - when they come to town.