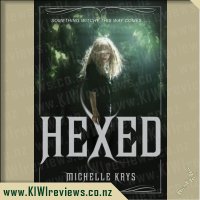 If high school is all about social status, Indigo Blackwood has it made. Sure, her quirky mom owns an occult shop, and a nerd just won't stop trying to be her friend, but Indie is a popular cheerleader with a football-star boyfriend and a social circle powerful enough to ruin everyone at school. Who wouldn't want to be her?

Then a guy dies right before her eyes. And the dusty old family Bible her mom is freakishly possessive of is stolen. But it's when a frustratingly sexy stranger named Bishop enters Indie's world that she learns her destiny involves a lot more than pom-poms and parties. If she doesn't get the Bible back, every witch on the planet will die. And that's seriously bad news for Indie, because according to Bishop, she's a witch too.

Suddenly forced into a centuries-old war between witches and sorcerers, Indie's about to uncover the many dark truths about her life - and a future unlike any she ever imagined on top of the cheer pyramid.

Against a Dark Background
Rating: 9.5

Rascal and the Cheese
Rating: 9.1

The Seriously Extraordinary Diary of a Pig
Rating: 10.0

I have been wanting a good book that I could really sink my teeth in, it had everything going for it, teenager cheerleader dating the cool guy, finds out she's a witch, magic fight what could go wrong with it? Sounds just like Twilight except instead of vampires its witches.

The book was a rollercoaster for me. It was alright written, it took me a while to really get into it. To begin with I was more intrigued as to where it was going. By the middle I was hooked and then at chapter 28 it lost me completely - the book just really annoyed me until just before the second to last chapter where it 'just' got me back. I still managed to read it within two days.

My problem lay with it's being told completely by a teenage hormonal girl. When her mother dies you hear about it, when rejected from Bishop, boy do you hear about it - she is rather immature and it shows, the 'poor me' just gets too much. It is very centred around 'teenage emotions'.

I do love Bishop however, his vocabulary and attitude is awesome, love the banter and fighting between Indie and Bishop and that alone is worth reading the book. The end left me a tad confused, but in saying that will definitly be first in line to read the next book. I can see this being made into a movie as definitly has the potential - really has 'Twilight' written all over it and I laughed whenever Bella was mentioned.