Home > Categories > Books > Non-Fiction > I Didn't do it for You: How the world betrayed a small African nation review

The Great War for Civilisation review

ProdID: 1021 - I Didn't do it for You: How the world betrayed a small African nation -  Written by Michela Wrong 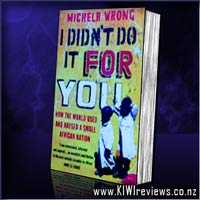 Disclosure StatementFULL DISCLOSURE: A number of units of this product have, at some time, been supplied to KIWIreviews by the company for the purposes of unbiased, independent reviews. No fee was accepted by KIWIreviews or the reviewers themselves - these are genuine, unpaid consumer reviews.
Available:
Available at all Good Bookstores.

I Didn't do it for You: How the world betrayed a small African nation product reviews

Scarred by decades of conflict and occupation, the craggy African nation of Eritrea has weathered the world's longest-running guerilla war.

The dogged determination that secured victory against Ethiopia, its giant neighbour, is woven into the national psyche, the product of a series of cynical foreign interventions.

Fascist Italy wanted Eritrea as the springboard for a new, racially pure Roman empire, Britain sold off its industry for scrap, the United States needed a base for its state-of-the-art spy station, and the Soviet Union used it as a pawn in a proxy war.

Eritrea? I'd heard of Eritrea but to me it was one of those places that was briefly mentioned in the middle of a news bulletin, usually in an item connected with civil war, hardship and revolution. Until I had the privilege of reading "I Didn't do it for You" how the world used and abused a small African nation' by Michela Wrong. In 432 pages she took me on a riveting trip through the history of this North East African state.

A state that has been a pawn and a possession, colonised by the Italians who had grand plans to turn Eritrea into the jewel of their empire. They built a remarkable railway system, factories, schools, cafes and restaurants and the tiny African state became one of the most developed in Africa. Then in World War 2 the British drove the Italians out, and proceeded to strip Eritrea. Much of the railway system was dismantled and used to build the railway system elsewhere in Africa. Buildings were dismantled and shipped out of Eritrea, and in just a few years the sophisticated infrastructure left by the Italians was pillaged.

Then came conquest by the Ethiopians who wanted Eritrea's port access (Ethiopia is entirely landlocked) followed by decades of rebellion by the highly trained Eritrean fighters. Despite the Ethiopians outnumbering them and being extremely well equipped, first by the US, and then the Soviet Union these fighters won freedom in 1991. Sadly Eritrea fell victim to a power hungry and corrupt leader, and after everything they have been through Eritreans still have a doubtful future.

Michela Wrong took me into the heart of Eritrea, and by the end of the book I felt a link to the country and even a love of the people. This is a book that will leave you not just knowing where Eritrea is, but filled sadness, anger, hope and love for the gutsy men and women of a tiny country miles from civilisation.