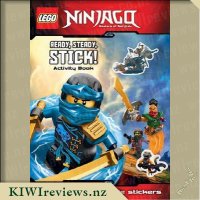 An evil wish-granting djinn and his band of Sky Pirates from another realm have come to seek revenge on the ninja and take control of their world! Will the protectors of Ninjago City find a way to defeat them? Find out by completing the activities with your re-usable stickers, and joining the ninja on their new action-packed adventure...

Myths and Legends of Aotearoa
Rating: 9.6 Our boys adore stickers and they are well and truly into Lego as well, so this book was definitely going to be an awesome combination for them. And unlike story books, this activity book has so many things to do that they are quite happy sharing. Mr Three is big enough now to detach the stickers without tearing them, and Mr Five (and about to start school) is old enough to be able to work out the story and actually ensure that the stickers go into the right place - with a little help from an adult to read the instructions to him.

I like the fact that the stickers can be repositioned if they end up in the "wrong" place. That is going to save many an argument as Mr Three is inclined to stick them in other places too - including his mother's phone casing! While he is busy decorating the world outside the book, Mr Five is busy solving the puzzles in the book itself. He can draw simple lines and shapes now and is well and truly ready for the classroom, so he has started adding ticks to the pages he has completed!

I do think books like this are wonderful for pre-schoolers. Sometimes the result does not match what the authors intended, but if it makes the child happy and he is enjoying his own version then why not? Certainly Mr Three, who is not known for his powers of concentration, kept himself occupied for over an hour during which time he decorated not only the phone but also the door, a mug, and his own bag. Meanwhile Mr Five was carefully placing his in what he hoped was the right place in the book, and was equally absorbed in what he was doing. At one stage, he had some of his own Lego figures lined up to watch.

Later that evening, when Mr Three had finished his decorating and moved outside to play something else, Mr Five carefully did a round-up of all his sticker activity, detached Mr Three's artwork, and repositioned it in the book. This was where the re-usable facility came into its own. Mr Five was satisfied with his rearranging but I don't think Mr Three noticed - he was too busy letting off steam with a plastic toy sword outside and pretending to be a ninja.

I think this is a great book for little ones. You don't have to be big enough to read to be able to get a lot of mileage out of the stickers and the different activities. I like the bright colours of the full page spreads - they are eye-catching and fun to look at. At the same time, they encourage hand-eye co-ordination and the chance to learn about shape and colour matching. Altogether a lovely production, guaranteed to give little ones hours of fun.

My daughters (6.5 and 8 years old) are huge Lego fans. I knew when I saw a Ninjago activity book that it would be a hit with them. Ready, Steady Stick is essentially a sticker book. There is no pen required and very little reading needed. This made it perfect for my youngest who is a reluctant reader. There was only a sentence or two to read on each page before she could do the activity.

I decided to use the book as a reward and a bit of one on one time once the girls had finished their tasks. I sat with them at first as I thought they might need some assistance, neither of them did so instead I sat with them to hear their feedback of the book. They both loved it and wanted to play with the book whenever I suggested it.

There is a variety of activities including spot the difference, jigsaws and putting disguises on the characters. As a parent I loved that there was a range of closed and open activities so they had a chance to be creative rather than being right or wrong. Many of the activities could be done cooperatively or independently. The stickers are re-useable but once my girls had done it they wanted to move on to the next one rather than revisit it again.

This book would make a great gift, a stocking filler or to keep on hand for the long car trips or waiting at the doctors.

You Can't Scare A Princess

And they don't take orders from a princess....or do they?