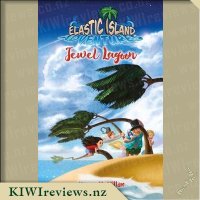 Jewel Lagoon is the first in an exciting new fantasy series, Elastic Island Adventures. Four children, Kiri, Jed, and twins Emma and Ethan, discover an "elastic" island that can send them pinging across the South Pacific Ocean to a variety of tropical island destinations. Landing at Jewel Lagoon on Trinity Island, the children quickly find themselves in trouble.

But even with help from the colourful creatures they meet - Pangali the Platypus, Big Wig and Wee Wig Knockulous, and Olaf the Giant, it is still unclear as to whether they will be able to return home safely.

The Riddles of Epsilon
Rating: 9.0

I was hooked into this book from the very start - Miss Eight and I read it together and talked about it as we finished each chapter, something she loves doing. It is about the right level for her; the text is well constructed but not too difficult for a reader her age. And the story has all the elements that appeal to children with a sense of adventure: an island that doubles as a new means of transport, a group of children off on an amazing quest, "goodies" and "baddies", and a big problem that only these children are able to fix.

We both enjoyed the various weird and wonderful animals, especially the Knockulous pair who were Miss Eight's firm favourites. It is a given in books like this that the animals can speak with humans; it is a simple progression from a family pet like a dog or cat that can communicate non-verbally (whilst making it very clear that it wants something like food or a game with its ball) to the creature that can take part in a spoken conversation. Children find this quite logical, and just accept the situation without questioning it.

Initially, we got confused between the apes and the monkeys as we thought the names were being used interchangeably, but then realised that there were groups of both: the monkeys were the small to medium ones while the apes were much bigger and much more intelligent. Once we had established that, the story flowed without problems. Whereas the apes and monkeys were aligned with the villains, the Platypus (Pengali), the Giant (Olaf) and the Knockulous (Big Wig and Wee Wig) were on the side of the children as they sought to defeat the wicked Chief Namba and restore the magical Princess Makana to her rightful throne.

The introduction of the bullies in the very first chapter intrigued Miss Eight. Like all children, she is familiar with bullies and was pleased that the friends managed to escape them. However, she was not impressed that the physical appearance of the bullies was emphasised - they were described variously as ugly, fat, clumsy, unfit, large of nose, and having a shaven head. Miss Eight has been taught to respect others no matter what they look like, and she was particularly critical about the first boy being referred to as fat several times over the first few pages. Her own friends come in all shapes and sizes!

There was one other aspect that I (as an adult) thought was misplaced in a book written for upper primary and intermediate aged children. There was more than a hint of sexual tension between Kiri and Jed. Kiri looked away when he took his shirt off; on another occasion, she blushed when they accidentally stood too close. She commented on Jed's "dreamiest blue eyes", and he got embarrassed when they were expected to sleep side by side in a very small cave; in the end he slept on the ground outside. While these four instances were all quite minor, and did not bother Miss Eight, I felt they were inappropriately placed in a story designed for such young children and added nothing to the context.

Apart from those two reservations, however, I thoroughly enjoyed the yarn along with Miss Eight. McMillan writes well; the story is exciting and extremely well crafted. It is refreshing to read a new book in the fantasy genre, and I look forward to reading the second book in the series. It was also good to see local place-names mentioned. I will never visit Browns Bay again without looking for the elastic island!

Windows Vista essentials at your fingertips!

If you like your answers quick and your information up-to-date, look no further. With this concise, superbly organised reference, you can easily find what you need to know about Vista's new Aero Glass interface, managing your files and folders, cool new networking capabilities, Internet Explorer 7 and Windows Mail, speech recognition, security, entertainment features, and much more.