« Tess of the D'Ubervilles review 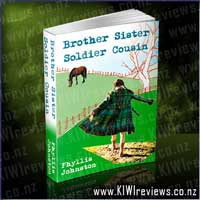 Brother Harry is home from fighting in Egypt - just for a while. He's a breath of fresh air in the midst of food rationing and twice-a-day milking. He teaches 13 year old Helen to drive, and to fire a rifle, just in case...

But Dad's heart is wonky, and sister Jess is an ice-queen. Then Harry lets slip that Helen's not actually who she thinks she is.

For Helen it's a dizzying job, finding the wisdom, courage and humour to "grit up" and get on with it.

I was drawn to this book for two reasons; a) it's based in New Zealand and b) it's during the war. This book was very enjoyable. It was an easy read, and i read it in a day.

Based in the Waikato area it follows a family during the Second World War. As the father was unfit to join the battlefield, it was the son Harry who enlisted to help fight for his country. It was also Harry that threw a bombshell into the family by forcing his parents to tell the youngest child Helen, that she wasn't their biological child. She was in fact their niece, therefore the children's cousin. Hence the title of the book.

There are moments of fear, humour, and wisdom. Helen shows the wisdom and courage to be able to talk to her biological mother, and find out about her biological father, and the children he has to his wife. In doing this, and coping with the loss of her Dad (the one who raised her) Helen realises that her Dad was the one that cared for her and no matter what, her heart would be forever with her parents, Harry and Jess.

The last 4 pages got the tear ducts working most of all, but the whole story was great, i couldn't put it down, it left me wanting to know more if i did. I think this would be a great teachers resource for primary to intermediate aged children.

Could there possibly be anything more absolutely, mega embarrassing than being called Parsley? You bet. After a disagreement with the local council, Parsley's dad decides to set up his own principality, making 12-year-old Parsley - Princess Parsley!

How about that for making you popular in your first year of high school? But it's the way Parsley approaches being a princess that really causes a stir, and a lot of laughs.