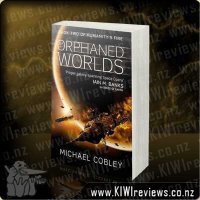 Disclosure StatementFULL DISCLOSURE: A number of units of this product have, at some time, been supplied to KIWIreviews by the company for the purposes of unbiased, independent reviews. No fee was accepted by KIWIreviews or the reviewers themselves - these are genuine, unpaid consumer reviews.
Available:
at selected quality bookstores

Darien is no longer a lost outpost of humanity, but the prize in an intergalactic power struggle. Hegemony forces control the planet, while Earth merely observes, rendered impotent by galactic politics. Yet Earth's ambassador to Darien will become a player in a greater conflict as there is more at stake than a turf war on a newly discovered world.

An ancient temple hides access to a hyperspace prison, housing the greatest threat sentient life has ever known. Millennia ago, malignant intelligences were caged there following an apocalyptic struggle, and their servants work on their release. Now a new war is coming.

O...M...G... I think I may have found another 'co-favourite' author... Michael Cobley is amazing, as good in his own way as my other fave 'space opera' authors, such as Iain M. Banks, Greg Egan and Peter F. Hamilton. This being the second book in the Humanity's Fire series, it is where the real action starts to kick in... and boy, does it ever!

In a 'traditional' trilogy, the first book tends to be scene-setting and introduction of key players... This is usually followed by the lead-in to the real action, setting up for the third book slamming through with the high-end action and culmination. If this series follows that pattern, the third book is going to be a mind-killer, because THIS book is amazing!

We start right off with all of the characters at full-strength, and so the extra little reveals aren't so much a bit of new information, more like a fine grain of texture... like looking at patterned wallpaper and seeing that this lovely swirling shaped is actually made up of little ridged dots - not the smooth unbroken line we first thought... but because the pattern hasn't changed, it's easier to accept quickly and integrate into the little virtual model of that character running in our heads.

I loved how even the most powerful, omnipotent characters get revealed to have their own weaknesses too - failing to see traps ahead, getting caught by surprise, having their little devious sides brought to light... it makes them more accessible and believable - for all their god-like powers, they're just like us.

Overall, I loved this book - can't you tell - but I have to say, I am bracing myself for a stunner of a finale with the next book... I just hope it lives up to the promise. I will still go into it with an open mind, but seriously, it's going to have to be utterly incredible to live up to the stage this one has set for it. Bring it on, Mr. Cobley!

Marla Wolfblade is still reeling from the loss of her two closest confidants. Blaming their deaths on Alija Eaglespike, High Arrion of the Sorcerers' Collective, her plans for revenge are disrupted when she discovers she has an even more dangerous adversary ... a professional assassin.

On the border, Fardohnya has massed its troops for an invasion, and Marla's eldest son, Damin Wolfblade, heir to the throne of Hythria, finds his ... more...