All Because of a Cup of Coffee review 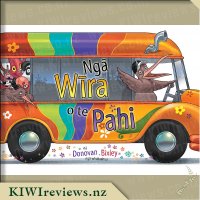 "The wheels on the bus go round and round ..." Everyone knows the song. But now the bus is going around beautiful New Zealand and its passengers you might just know: kiwi, penguin, tuatara, fantail and many more. Come along for the ride!

Tortoise and the Hair
Rating: 9.1

Harry Potter and the Goblet of Fire (Illustrated)
Rating: 10.0 Mr Seven thought he was the luckiest boy in the world! All week he has been practising a new song on the piano thanks to the music printed in the back of a book we had just reviewed (Te Pamu o Koro Meketanara). Now here was a second book in the series - just as colourful and with just as much fun packed inside! When I gave it to him, he did not wait for me to sing it through first. He and his sister took off with it and opened it straight away at the back page so he could check out the music.

The notation was just a little bit more complicated than the song in the first book as it included another new note. I asked if he could figure out what it might be, but he had already worked out that it was the C above Middle C and had located it all by himself on the piano. He needed some help with the fingering, however, as this was the first time he had learned a tune that spanned a whole octave. Once he had that sussed, he was away, sight reading and sounding out the words to fit as he went along.

I cannot emphasise too much how useful these books are as an educational tool. Here was a seven year old who six months ago could not read music at all, let alone sound out written Maori, singing the lyrics without assistance and accompanying himself. There is a huge sense of achievement for a child both in the reading skills and in the coordination of hand, eye and vocal skills. In other words, he was extremely pleased with himself!

The music is, of course, only a small part of a beautifully designed book. The words are all in Te Reo; no barrier for a child who is enjoying increasing his knowledge of the language daily and trying to use it in everyday communications. He is lucky to be at a school where students are encouraged to become bilingual and are actively taught to speak and read in Maori. And of course he had a head start with the book as he already knew the tune and the words in English.

I love the way Bixley has set the bus in a kiwi setting and presented all the passengers (and the driver!) as a variety of creatures on a sightseeing trip around the country. Each page is signposted with a clue so the reader can work out where it is. Mr Seven and I especially liked Nga Kohatu with the elephant selling ice-creams from his kiosk so the hot travellers could get out of their bus, and Nga Ahi Tupua with the animals ready to go skiing against a backdrop of snow-clad volcanos. This is such an imaginative way to present some of New Zealand's most famous spots, and after Mr Seven had finished playing the song, we had a geography quiz as we tried to match up the pictures and signposts with the locations listed on the map near the back of the book.

We are both totally sold on this series. The books are beautiful, they are interactive, they are cleverly designed, and they teach kids to learn in a fun way. I hope there will be many more to follow!

Welcome to the worlds of Chrestomanci, where magic is as common as mathematics!

Everybody says that Gwendolyn Chant is a gifted witch with astonishing powers, so it suits her enormously when she is taken to live in Chrestomanci Castle. Her brother Eric (better known as Cat) is not so keen, for he has no talent for magic at all.

However, life with the great enchanter is not what either of them expects and sparks begin to fly!