ProdID: 7366 - How To Hide A Lion At School
Author: Helen Stephens 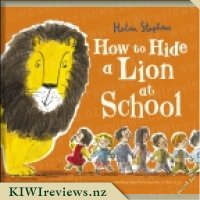 How To Hide A Lion At School product reviews

Lions aren't allowed at school, but Iris's lion doesn't want to be left behind. He even stows away on the school trip to the museum, causing much madness and mayhem as he hides among the exhibits. But when the school bus breaks down, it's time for the lion to be a hero. He leaps to the rescue, and carries all the children home on his back.

Underland Chronicles 2 - Gregor and the Prophecy of Bane
Rating: 9.4 Miss Four picked this book up and said she liked it - before she had actually looked inside. I asked her why: her response was that it had a lion on the front and she loves lions. To prove it, she went and got her own stuffed toy (which is actually a tiger, but as she says, they are from the same family) and cuddled up with it while we read the book. Every so often we had to stop so that she could show Tiger the pictures and explain what was going on. It took us nearly an hour to read to the end, but never mind, she was thoroughly enjoying it! (And so, no doubt was Tiger. But he was very quiet and just listened.)

As a teacher myself, I could relate to the poor, hassled Miss Holland who kept getting grumpy because Iris's lion kept turning up to school and trying to hide so she would not see him. We both wondered what his name might be, but as Miss Four has her own stuffed tiger whose name is Tiger as well, she decided that the lion ought to be just called Lion. She was very impressed with the picture of Lion spread out on top of the school bus with the wind in his mane and the anxious expression on his face as he tried to stop himself from falling off. She said that Tiger would probably be too scared to do that so Lion must be very brave.

The pictures in the book were quite charming, with Lion appearing in various poses as he tried to hide in different places - many of them quite uncomfortable. We were continually pausing the story so that Miss Four could check out his latest hiding place and then show me and Tiger. She burst out laughing each time she spotted him - some of the locations were trickier than others but she would not give up till she had worked out where he was.

There is something very special about sharing a story like this with pre-schoolers. Their sense of humour is infectious, and their ability to accept without question the idea of a lion going to school and playing with the children is sheer magic. I love sharing books like this with little ones and it is so good to be part of their enthusiasm and see the pleasure they get from stories. Little ones who are privileged to have stories read to them grow up to become avid readers in their turn which has got to be great!

When his X-ray eyes spot someone in trouble, Superkid is always ready to save the other children from all kinds of horrors - from playground bullies to grandma's broccoli - or most terrifying of all, having to tidy up their bedrooms!