How To Hide A Lion At School review 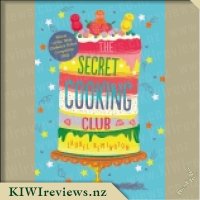 Shy Scarlett is the star and victim of her mum's popular blog. When she discovers an empty kitchen next door, and begins to bake, she's desperate to stay firmly out of the spotlight. As more people find out, and Scarlett's confidence grows, the Secret Cooking Club is formed. But can the club stay undiscovered? And can Scarlett find the secret ingredients - to cake, family and friendship?

Lulu and the Dog from the Sea
Rating: 7.8

I can think of nothing worse than having a mother who uses her own child to further her career. Children past the age of ten or so are increasingly embarrassed when parents accompany them to school or other places where they don't want their friends to think they are still little kids. And as for talking about their son or daughter in front of their mates - forget it! That is the stuff that nightmares are made of. So every young reader will empathise with poor Scarlett.

However, Scarlett is determined to make something of herself without her mother's interference, so when she discovers an abandoned cat next door, a whole new world opens up for her. The old lady who lived there until she went to hospital was a master cook, and the kitchen she has left is just begging for Scarlett to start using it.

The plot traces Scarlett's growing awareness of her own worth as a friend, both to her classmates and to her elderly neighbour. In this respect it is a coming-of-age story which highlights Scarlett's self-confidence and her ability to deal with new and challenging situations. At the same time, Scarlett's mother does some growing up of her own as she realises that her daughter is no longer a cute little kid but a fast-maturing young woman with a mind of her own.

I enjoyed the way the serious social issues (elder care, family relationships, growing up, and friendship) are woven into the story so that they are integral to the plot. Children of intermediate school age and older will enjoy it, but it has appeal for grown-ups as well. This is, of course, the hallmark of a well-crafted story; it has universal appeal.

I asked Mr 14 to read it, thinking he would complain because it was a "girls' book", but to my surprise he really enjoyed it. He was intrigued by the section towards the end when Scarlett gets her own blog, and commented that it was interesting that they chose to print this section in a different font. He was not so keen on trying out the recipe however, although he did say he would happily eat the results if someone else wanted to experiment!

Altogether, this book is quite charming. I loved it just as much as he did, and found it held my attention as completely as it did his. Mr 14 related to Scarlett's issues with her mother's interference and embarrassing ways as he goes out of his way to avoid his own mother when it is raining and she collects him from school - she has orders to park around the corner and wait! And Rosemary Simpson reminded him of his own grandfather who is just as independent, although he has a dog rather than a cat and prefers to stay well away from the kitchen.

It's true life really is like a roller coaster. One minute you are depressed - thinking the world is against you and everyone hates you, then you are on top of the world with everything going your way then life takes a sharp right hand turn and you whole world crumples around you but yet life still goes on and the roller coaster continues on its merrily way.

Originally, I had asked to review this book with the attention of reading a chapter a night with my eight year old daughter. But, it is way longer than I thought with 41 chapters so I decided to read first and my daughter will start this next week. The chapters vary in length, anywhere from four pages through to about twelve pages long. It is a very straight forward story and moves along at a steady pace. It is rather repetitive and brings out a range of emotions throughout the story. By the end of the book I was a blubbering mess and I have not cried so much in such a long time, I can see why it won the Times Children's Fiction Competition in 2015.

If you do not like baking you will want to experiment after reading this book. Unfortunately, only one recipe was shared but I am very eager to give it a go. I would of liked the flapjacks recipe, as I am unsure what they are and will definitely be googling them. It brings about an excitement of being in the kitchen again and leaves me wanting to create meals from scratch.

The book also makes you question the way you parent and aids in seeing it from the children's point of view. How hard it is for both the young and odd. Expressing the desire for kids needing their mums attention but yet mums needing to find their own identity and self worth and the desire to succeed in this modern world. It flips you around but yet resolves most of the issues beautifully. It reminds you that there are lonely elderly people out there and how important it is to get to know your neighbours. It covers so many subjects in such a short time.

I am surprised by how long it took me to read. I expected it to be a rather fast read but instead it takes time reading the 276 pages. It definitely touched me in a way I was not expecting it too. I can not say it held my attention entirely but it was still a beautiful read and I am sure my daughter will be just as moved as I was.

The king's mistress, Alice Perrers, becomes the virtual ruler of the country from his sickbed. Disliked and despised by the Black Prince and ... more...