ProdID: 2429 - Shadow of the Scorpion
Written by Neal Asher 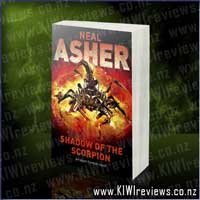 Shadow of the Scorpion product reviews

Raised to adulthood during the end of the war between the human Polity and the vicious arthropoid race, the Prador, Ian Cormac is haunted by childhood memories of a sinister scorpion-shaped war drone and the burden of losses he doesn't remember.

In the years following the war, he signs up with Earth Central Security, and is sent out to help either restore or simply maintain order on worlds devastated by Prador bombardment. There he discovers that though the old enemy remains as murderous as ever, it is not anywhere near as perfidious or dangerous as some of his fellow humans, some of them closer to him than he would like.

Amidst the ruins left by wartime genocides, he discovers in himself a cold capacity for violence, learns some horrible truths about his own past and, set upon a course of vengeance, tries merely to stay alive.

Vikings in the Supermarket
Rating: 10.0

Myths and Legends of Aotearoa
Rating: 9.6

Strangely enough, though I found this book to be an excellent insight into the history of Ian Cormac - Agent of the ECS and member of the elite fighting class, the Sparkind - I had to wonder what the point of it was, other than to provide some background into the character that is Agent Cormac.

Yes, it showed the process that led to him becoming the ruthless, highly effective and incredibly lucky agent of the Polity, but in terms of advancing the plot of the Polity universe, it was a bit of a dead end really. We get a couple of brief, and somewhat pointless, encounters with some near-dead Prador second- and third-children in a downed starship, and the rest is basically Cormac getting beaten up, running around, having a good tumble in the sack with one or another of his war-team, or killing something all too quickly (His battle to save his life against 7 armed opponents lasted.... 2 pages). At 296 pages, I was through it in under 2 days!

Despite all of this, it IS a well-written tale, and a good back-fill into the early and formative years of Cormac's life. It should give more insight into why he acts the way he does in other tales... but not every reader is going to find it worth the cost and effort, I am sure.

All in all, if, like me, you are a bit of a purist (Translation: Hate to be missing any titles in a collection) you're going to want to get this one eventually... but you may decide to wait for a sale or deal at your local book retailer. If you are all about high-tension, full-on action plots and every page exploding with relevent content... well... this might not be quite up to your high standards.

Will you survive or will you die? You are swimming through the ocean, trying to escape dangerous mercenaries who have planted a bomb on the mainland. Behind you, getting closer, is the largest shark you've ever seen. An explosion rips out from the shoreline and a massive wave flings you closer to the stunned shark's open mouth. You don't have much time, and you need to get to land. Do you keep swimming or do you climb onto the ... more...