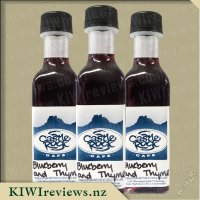 Paired perfectly with any salad or couscous, delicious matched with feta or you can use as a marinade for red meat (game) such as venison.

Chocolates Are Us - Coconut Rough
Rating: 9.1 I was looking forward to trying out these different flavoured vinegars, but I had a dilemma when they arrived as I was heading on a little holiday in a few days and was on a bit of a strict budget, so my initial plan of using it in a marinade for venison, well that idea went out the window. Instead, I went with a nice simple (and cheap) bread and dips combination. Being able to get a 24 pack of ciabatta rolls from the supermarket, I was easily able to set up a quick tasting platter on a budget.

The product itself comes in a rather small bottle and has dark purple colouring to it. What was interesting was when I poured some into a dish, it quickly diluted into a light red or pinkish colour. Adding a little canola oil on top (olive oil works well too) I dipped my ciabatta slices into it and had a taste. I found the flavour was quite concentrated, and very sweet. It didn't have the tartness or tangy vinegary flavour that I was expecting, and actually made me think I was eating some kind of raspberry jam in a sandwich. It made me do a double take. It was quite odd to have a product taste so similar to a completely different product.

But I love the flavour. I originally thought the quantity provided would not last long, but you don't need to use much to get a full flavour, so it's still great value. The small size also makes it much easier for storing, compared to other vinegars that come in the unnecessarily tall and long bottles. I enjoyed this product so much that I ate those ciabatta rolls and dips for every meal for two days. The only downside is that the sweetness can be a bit overwhelming after a while, but if you have it alongside another dip (I went with a Balsamic Honey Vinegar) it's nice and easy to balance out the tastes.

Blueberries have to be one of my favourite fruits, and when blueberry season hits I love going blueberry picking where I am able to stock up on blueberries for the freezer, since they are of those fruits that are so versatile and can go in anything, smoothies, baking, fruit salad all sorts of things. Being a fan of blueberries I was most excited to see a blueberry and thyme vinegar come up for review, and I knew it was something that I would just have to try.

Upon receiving the bottle of the vinegar the first thing I noticed was it's size, being 100mls it is considerably smaller than most flavoured vinegar you can buy, however I took this as a good thing as sometimes I just find my fridge becoming over flowing with huge half used up bottles of dressings and such, so I liked the fact that I could easily get through this bottle, if I was to like it, which I did! The packaging is very simple, yet eye catching featuring a Castle Rock Cafe logo and a simple Blueberry and Thyme picture. It does feature a list of nutritional value details on the back, as well a list of ingredients. The other one thing I noticed is that this product is made with love in small batches rather than by bulk as it has a batch number on it, to me this suggests quality, being New Zealand made even better still!

When I opened the bottle I could definitely pick up on the smells of both the blueberry and the thyme, but also of the balsamic. Reading the label there were several suggestions for use such as pouring it over salads and pancakes or over feta or roasted lamb. The first night I choose to serve a small drizzle over a salad which consisted of lamb, lettuce, tomato, feta, cucumber and capsicum, and I found that the flavours went really well together, the vinegar was there and added a nice fruity hint to the salad which I actually really liked, as did my partner and we both agreed that it didn't take the flavours away from he rest of the meal. I decided to explore the flavours even further and have since used this as a sauce on chocolate ice cream and I have to say this was absolutely delicious, it gave such a yummy flavour and tasted just like a chocolate berry ice cream, it was really good! This has also been tested out over a batch of blueberry and chocolate chip pancakes which I whipped up and served with cream, this once again made a tasty sauce, and went well with the chocolate!

The sauce is very sweet and fruity, and this makes it ideal for both sweet and savoury dishes, however in my opinion it is better served with sweet dishes rather than savoury, however I suggest trying it both ways as you might have different tastes than me. A very tasty vinegar which I recommend trying if you enjoy blueberries! The price is a bit steep for the amount of product you get, but a little goes a long way in this case!

Blueberry always catches my attention as I spent many years picking them as a student. I figured that I would like Castle Rock Cafe's Blueberry and Thyme Vinegar. I am not 100% sure what I did expect from the vinegar, but it was certainly much sweeter than I thought it would be. After reading the back of the bottle to say that it was suitable to use with feta cheese, salad, pancakes and minted lamb, I immediately thought that it would be good with lamb. When I actually tried it, I found that it was too sweet.

I tried pouring the vinegar onto various parts of different meals - veggies, potato, meat, salad etc. To be honest, it wasn't really to my taste at all. I think it was simply too sweet for me. The best option I tried it with was bread and dukkah. I mixed a little olive oil and Blueberry Thyme Vinegar together and used the bread to dip into it before dipping it into the dukkah. This was the one way that I actually enjoyed it. I didn't try it on any of the other suggestions on the back of the bottle as I really think that the flavour wasn't for me. Perhaps some people might like it mixed with a bit of olive oil and drizzled over salad. I think that the addition of the oil makes it a bit more savoury in taste.

I think that my mindset for vinegar didn't help the situation with what I thought about the vinegar. When I hear the word vinegar, I think of it as having a distinct vinegar taste with other flavours added in. I also think of it as a more savoury flavour than a sweet one like this product.

Something that I really appreciate about this product is that the ingredients are fully recognisable. Blueberries, vinegar, herbs and sugar are the only ingredients (in that order). It is something that could have been made in a home kitchen as it doesn't have lots of unrecognisable ingredients. in the list.

Although this product wasn't for me, I had heard that some of the other products in this range may be more suited to my taste and therefore worth trying. My mother tried this one while she was visiting the other night and she quite liked this variety. This goes to show that different people do have different tastes!

Potato chips are a kiwi favourite. Whether it's at a picnic, a family BBQ, drinks with friends, at the beach or hiding in the pantry, we love to rip open a packet of chips and munch away. But, as we all know, they're not the healthiest snack option! Finally, a healthier alternative has arrived.