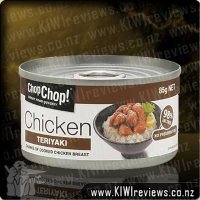 Disclosure StatementFULL DISCLOSURE: A number of units of this product have, at some time, been supplied to KIWIreviews by the company for the purposes of unbiased, independent reviews. No fee was accepted by KIWIreviews or the reviewers themselves - these are genuine, unpaid consumer reviews.
Available:
at local supermarkets

I have to start this review by being completely honest and saying that canned chicken is not something I would go out and buy, to be quite honest the whole concept of eating chicken from a can actually grosses me out, mainly due to the fact that I have always had the whole never reheat chicken, never leave cooked chicken out of the fridge, always make sure your chicken is cooked properly statements drilled into my head from a young age, so I guess due to this I just can't figure out how canned chicken can in fact be safe to eat?

None the less I recently received a sample of the Teriyaki Chop Chop Chicken and while I wasn't sold on eating it myself ( even though I had previously tried a lite mayo variety and found it was edible) Miss 3 was excited that we had received some canned chicken. Being close to dinner time I decided to use the chicken to create a stir fry type meal for her, we were to be having something that she wasn't a fan of, so this seemed to have arrived at the perfect time! I stir fried a variety of different vegetables broccoli, cauliflower, carrots, sweet corn and peas and boiled a little rice to go with it. Once the vegetables were cooked I added in the chop chop chicken. I was amazed at how much was actually in the little can and so didn't end up using it all. The sauce smelt just like teriyaki sauce and was plentiful and dark in colour, i'm guessing due to the soy sauce content. Mixed with the vegetables it didn't look that appetizing however Miss 3 didn't complain and got stuck into it.

Miss 3 thought her chicken was "delisimo" and I have to say it wasn't to bad tasting the teriyaki flavour was quite nice, however I found the texture of the chicken to be rather chewy and stringy, not how chicken should be. With the left over chicken we put it on to a sandwich and it seemed to spread quite well and didn't make the bread soggy or fall out creating a mess, like chicken sometimes can.

The flavours of teriyaki were there and were lovely but the chicken itself just isn't for me, however I can see how something such as this can be handy to have and convenient for throwing together a quick meal, and for this reason it is something I may consider picking up a tin or 2 of to have on hand for a quick and easy meal for miss 3.

I'm very impressed with the freshness of the chop chop chicken range.

I may never buy tuna in a can again :) I find it quite dry compared to the lovely softness of the chicken.

I mixed this through some rice, simple, easy and very very yummy!

This range may just turn me into the laziest cook ever

Many years ago, on a trip into the heart of the orient, I was required to learn how to eat with chopsticks. It was either that, or not east, since in that particular region touching food with hands was considered not only unhealthy, but also a great insult to the host. To master the skill, I instead worked on being able to pick up a single grain of rice. If you can do that, anything else is child's play. A week of entertaining the children who all thought I must be thick or something, to be having such difficulty in a task they mastered before they would talk, I had my black belt in chopstick eating.

By then, of course, I had also mastered the ability to stomach whatever they put in front of me as "food". In many cases I would have called the SPCA, had it been served to me in a restaurant.

But I tell you this, the one dish that I never had trouble eating, was Chicken Teriyaki. Never did I turn away from that. It was always a delight to eat. And so was this. Although to be honest, the original doesn't taste anything at all like this. As a mass-produced, consumer-variant of that dish though, this does a pretty good job of giving the idea of the flavour to tastebuds who would blanch at the real deal. To that end, I feel it only fair to give a slightly lower score, since this is only a close approximation of the genuine article, but I give them kudos for being even this close, when I have tasted far worse that dared to carry the name.

In summary: a very good "close-enough" well worth trying. If you find this appealing, you may want to explore wider horizons in your eating habits. There is a whole world of flavour out there and this is one of many good doorsways to start with.

I have become a huge fan of the Chop Chop! range of canned chicken. This flavour only rated a little lower simply because I've been using them mainly in my sushi and the shredded chicken is easier to use and does seem to go a little further.

That said this still can't be beaten for freshness and taste, not what I'm sure some expect from canned chicken.

As with their other flavours it's great for those watching calories and makes for a really convenient meal. It's been fantastic to be able to pull out a can of this to use in pita pockets with salad fillings for a really fast lunch, quite frankly what I think every parent needs!

Will be keeping these around.

This, I admit, was the real wildcard entrant into the sweepstakes as far as I was concerned. Never having tried traditional Teriyaki, only the Americanised version that tastes more like a mix between an MSG syrup and BBQ sauce, I had no idea how this was going to react with me. Surprisingly, though it wasn't my favourite it struck a real chord with me.

Having always enjoyed Asian foods - at least the ones that didn't have eyes or limbs still attached, or were still twitching, when served - this one strikes me as perfect to be made into Sushi, or used in Steam Rolls. Feeling a little brave, I thought I would experiment a little too...

Riceballs were the obvious choice, since I didn't have the required equipment, or Nori, for Sushi on hand... so it was time to make some sticky rice, wrap some chunks of Teriyaki Chicken in it, and gently shallow fry them. I could have steamed them, but wanted something that held together a bit better. The results... not astounding, but pretty good for a first attempt, if I do say so myself. More pracxtice will be required before I pout any pictures up on the Facebook #FoodLab album though.

Overall, on it's own, this chicken is a little bit of an acquired taste for me, and frankly one I probably won't bother acquiring. But as an ingredient in other dishes, I can see a LOT of potential, and will certainly be experimenting more before I decide whether it will become a pantry regular, or only an occasional dinner guest. :D

ORGRAN Molasses Licorice is a delicious snack that includes the many benefits of Licorice Root. Licorice Root has been sought after for its flavour and reputed medicinal qualities for thousands of years.