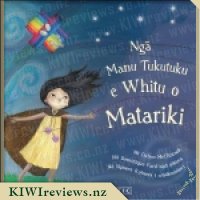 it was deep mid-winter and all through the village preparations were being made to farewell the old year and greet the new. For the first time ever, the seventh little sister, Ururangi, was big enough to make her own celebration kite.

But when the seven sisters take the finished kites to fly them, the east wind whips them all away into the sky ... where they now appear as the stars of Matariki to welcome the Maori new year.

SHINE: Make Them Wonder What You've Got
Rating: 8.5

The Race for the Chinese Zodiac
Rating: 9.3

I do have to be honest in beginning this review - I didn't look carefully enough when requesting review items and requested this book in te reo Maori. I am not a fluent Maori speaker, although I can pick up words here and there. Being an early childhood teacher we use Maori on a daily basis - just not enough to be able to read the book! However I was able to source the english words to print out and have alongside the book. I do have to point out however that upon my first look through the book I did pick up on most of the story - and that is down to the amazing illustrations within the book. I love the colours and the details in the pictures. They matched what was happening in the story perfectly.

Being an early childhood teacher Matariki is something we celebrate with our tamariki each year. A story teller from the local library always pops out to read us some stories and teach us some songs so we had a few Matariki stories we were aware of before this book arrived. I personally hadn't heard of this one and was very keen to share it with the tamariki. Kites are something that many of our children have had an experience with, and this always helps to keep their interest in a story. Some of our older children (4, almost 5 year olds) were able to compare the story to the similar Matariki stories we had heard in previous weeks.

This story had an extra added bonus - being about kites it started an interest in our tamariki about kites and kite building. We have had a construction focus thanks to a house being built in the yard behind our centre, and this story not only taught us about Matariki but gave us a new avenue to go along in terms of construction and design. The tamariki were very keen to design and create their own kites making sure to incorporate some of the decorations that had been shared within the book.

This book is one that will stay in my teaching kite. It is a fantastic little story about Matariki and how the starts got into the sky. It is certainly one of my favourites out of all the myths and legends I have heard.

I love the fact that there are more and more books appearing simultaneously in Te Reo Maori and in English. It is important for the younger generation to have good quality books available to them in both languages: it is part of our New Zealand heritage, something that makes us unique. I lived for some years in Ireland and admired the fact that all schools aimed to be bilingual. My own children grew up studying both English and Gaelic in their classes, and that provided a firm grounding in their own self awareness.

With Matariki pending, it is rewarding to see a book on this topic which takes a fresh look at the myths behind the Maori New Year and the Pleiades star cluster (in the constellation of Taurus). In this version, the youngest daughter is called Ururangi and that is also the name of one of the stars. The illustrations are a treat, incorporating stylised versions of Maori traditional clothing (korowai), kites (manu), and whatu (which can mean stone, anchor or eye and is used to denote the decorations on the kites which later shine in the night sky as part of the cluster).

Mr Three and Mr Four were thrilled with the story and we had to read it several times over. They were especially taken with the front cover, which features Ururangi wearing her korowai and flying her rainbow coloured kite. They traced around the paua whatu with their finger tips and we talked about how all the kites had been decorated with unique whatu that looked like different shells, but only Ururangi's was multi-coloured. They also loved the way that Ururangi did not follow her sisters but did her own thing!

After one reading, we went outside to check out the sky. Unfortunately, it was cloudy, so we could not tell if the stars had arrived yet. I had to return home, but I left the book with the boys so they can keep checking the night sky themselves and they can let me know if they happen to spot anything up there! This is a great way to introduce children to astronomy (and once again, they do not even realise that they are learning!).

I did have one problem with the book. It is beautifully produced and proofed, but there are a couple of typos in the glossary. This is a pity as it is the one problem with an otherwise very professionally presented work. Many words in Te Reo have only one vowel that separates them from a similar word, so a misspelling can mean that the entire meaning is altered. I had a personal difficulty as well in that some of the words were regional variations so it might be useful for less fluent readers to have these included in the glossary as well.

But overall, I was highly impressed. I loved the story, the way repetition was used to help less able readers to understand the reo, and the way that the illustrations provided a perfect complement to the narrative. The boys were very happy too!

Windows Vista essentials at your fingertips!

If you like your answers quick and your information up-to-date, look no further. With this concise, superbly organised reference, you can easily find what you need to know about Vista's new Aero Glass interface, managing your files and folders, cool new networking capabilities, Internet Explorer 7 and Windows Mail, speech recognition, security, entertainment features, and much more.