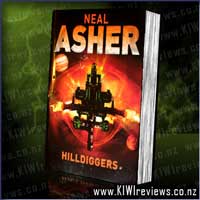 Disclosure StatementFULL DISCLOSURE: A number of units of this product have, at some time, been supplied to KIWIreviews by the company for the purposes of unbiased, independent reviews. No fee was accepted by KIWIreviews or the reviewers themselves - these are genuine, unpaid consumer reviews.
Available:
October 2007

A terrible war once raged between the two rival planets within a distant solar system. Over the centuries their human inhabitants had 'adapted' themselves to the extremely different conditions of their new homes, far outside Polity influence.

In the midst of this merciless conflict, one side encountered a bizarre object suspected of being a cosmic superstring employed as a new weapon by the rival side. Their attack on it caused the object to collapse into four parts, each found to be packed either with alien technology or some unknown form of life. pending further study, these were quickly encased inside four separate Ozark Cylinders and stored in a massively secure space station in orbit.

Sometime later, while conducting research on this alien entity, which they now call 'the Worm', a female scientist falls pregnant and later gives birth to quads. She then, inexplicably, commits suicide by walking out directly out into space...

The war was finally brought to an end by the use of new weapons arising from the reasearch on the Worm. These weapons were deployed by giant space dreadnaughts nicknamed 'Hilldiggers' - and their destructive power was sufficient to create entire new mountain ranges out of the vanquished planet's ravaged terrain. Twenty years after the dust has settled, those four exceptionally talented orphans have grown up to assume varying degrees of power and influence within a post-war society.

And one of this exceptional breed now seems determined to gain total control over the deadly Hilldiggers... but why?

I SO love this man's work! Highly reminiscent of Iain M. Banks' 'Culture' universe, where digital intelligences have taken over the benecificent domination and administration of humanity... a theme I seem to have taken rather a liking to a lot in the last year or so...

The plot is quite unlike any others of Neal's I have read, with the 'strange new technology/alien/artifact' not really being explained until a brief few paragraphs at the end... yet it was a key component of the entire plot... sure, I can't see a way it could have been done better, but then I'm not a world-famous, award-winning author either, so what would I know?!

While reading this, I couldn't help but get a bit of a 'species' vibe, mixed with a hint of the plot from the old classic sci-fi series 'A for Andromeda'... or more precisely, the sci-fi movie 'The Astronaut's Wife'... in that there is a definite alien influence in the key human players...

I found this story to be a little 'light' in the advanced science, which is an aspect of modern sci-fi I really enjoy... so though I still rate this a top-notch tale, it's not THE top story I have in my library.

Overall, a pretty good book... well worth the read if you like Asher or Banks, but consider this to be 'light reading' since there isn't really much in here that stretches the grey matter.

In the afterlife you may find that God is the size of a microbe and unaware of your existence. Or you may find the afterlife contains only those people whom you remember. In some afterlives you are split into all your different ages, in some you are recreated based on your credit card records, and in others you are forced to live with annoying versions of yourself that represent what you could have been.

In these wonderfully imagined ... more...