ProdID: 582 - The Roses of Roazon
Written by Cherith Baldry 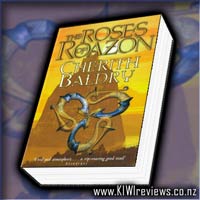 The Roses of Roazon product reviews

the land of Avorig is ruled by the Duke of Roazon under the guiding authority of the Church. peace has lasted for so many generations that its inhabitants has consigned to legend all memory of Autrys, the dark shadow of Roazon, which was banished from the world when the first Duke assumed office.

But when the new Duke, Jocelin, is accused of heresy, a gate is subtley opened for Autrys to return. Meanwhile, other princes see their opportunity to sieze power, and Avorig itself is in deadly peril.

As all those touched by war must make up their minds where their loyalties lie, in the end it is not the nobelmen and warriors whose influence will be greatest. Lesser folk and small decisions can produce greater consequences, but most of all the fate of the duchy now rests in the nature of Jocelin himself.

Life Cycle Of A Sunflower
Rating: 9.8

The Knight Who Wouldn't Fight
Rating: 10.0

You're Not Listening: What You're Missing and Why it Matters
Rating: 9.3

There are not many fantasy novels that grab my attention as rapidly as this one did. I guess the 'mystique' of a holy place going decadent and letting evil slide back into the world has it's appeal after all. I find myself unable to honestly give a comparison between this book and any other, as it really does stand alone, impressive in it's structure. Similar in some respects to many other books, yet clearly unique in it's own right.

The lead characters are, of course, major players, however their fate and final actions are dictated by the smaller characters. The whole trouble gets sparked by a young mother who paints religious icons, the homosexual rebel is brought in as a potential assassin and spy, the rallied defense is led by the discarded son of a nobel family... it's a series of rags-to-riches ministories, all just threads wound up tight in the sturdy rope of the plot.

I did find the residents of Autrys a little over the top, however considering they are the incarnations of evil who have been banished to either another realm, or underwater (it's never quite specified which), for centuries... I guess a giant slug with a woman's face and huge fangs isn't too far off the beaten track for a fantasy story.

Overall, I was quite impressed by this book. Not really my thing, which makes my can't-put-it-down reaction very telling indeed, but it was an enjoyable read from start to finish. The sideways-references to known historical figures gave it an bit of extra appeal.

Snail and Turtle are friends and love to spend time with each other. They like to run, walk and enjoy being quiet together.