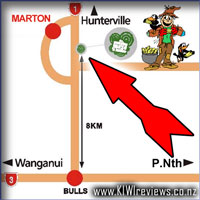 The Amazing Maze 'n Maize is a giant maze cut into a paddock of maize (animal feed corn). The maze is approximately 12 acres, or 6 hectares in size, and will take on average 45 minutes to complete. There are over 8 kms of paths, with bridges in the middle to get your bearings or watch your friends.

Trivia and joke signs are placed throughout the mazes, and visitors can choose to make it a competition or just a walk in the corn.

Amazing Mazes can be found South of Auckland, in the Bay of Plenty, Hawkes Bay, Marton, and Martinborough.Opening Day of the season is 26th December.(Martinborough 5th January)

There are many different ways to enjoy our Amazing Maze 'n Maizes. Join Cornelius, our scarecrow and have fun with the family during the day or at night in the moonlight mazes, bringing a work group for team building, a school class for fun and education, or a youth group or social club.

CornEvil
The "Fright Night" mazes are suitable for adults only, and is rated R16. please do not bring under-16's along as refusal to let them enter may cause problems for you.

People can, and do get very scared. You will have a comprehensive briefing from our staff before venturing into the maze. They will then do whatever is within their "rules" to give you a terrifying experience.

Your encounters will seem even worse accompanied by our especially compiled sound track. Yes the rumours are true! We have visitors every night who are unable to wait for the toilet. We look forward to haunting you.

I have been to this location before when they had a previous theme going on, and unfortunately didn't have that great a time. When it was suggested as a place to go on a drive I was going on with friends recently, I felt the memories of getting horribly lost, arguments, and general mayhem come flooding back and was worried that those experiences would be repeated.

Thankfully, I was proved wrong as time went on, and more flags were found and trivia learned (nice touch).

I had a great day, learned quite a lot about egypt and a close shave when the uneven ground successfully tripped up my wheelchair which then deposited me unceremoniously on the ground.

I would gladly go back for more of this kinda fun. But maybe less of the forward rolls.

It was a nice day, not too hot, and there were a group of us out and about for a drive. After heading to Feilding, then to Ashhurst, up to the windfarm, and back to palmy, we were still in the mood to travel and it was only 2pm. One of our crew mentioned the Maze, so into the car we again piled, and off, Marton'wards we went.

After being totally braindead and taking the turnoff to Marton, we had to double back and found the maze without any further hitches... the bridges and towers sprouting from the corn being an easy way to tell we had arrived. Drove in, plenty of parking. Great to see, especially as it was right up by the main office and entrance to all three mazes.

3 adults, one child, we were given a map and off we trooped, into the corn. With one of our number in a wheelchair, we were expecting some limitations to our mobility, and the bridges worried me, however the lovely lady at the front counter had fore-warned us of the bumpier areas, and explained that they had thought about wheelchairs and that there were alternate paths to bypass the bridges without getting us hopelessly lost. Wonderful foresight, most impressive to see.

With the average time set at about an hour in the maze, we were a little behind schedule when we emerged an hour and a half after we entered, but that was pretty good considering the 15 stop while we put our wheelbound comrade back into his chair after a losing encounter with a crack in the sun-baked ground.

The maze itself, great to get lost in (We had to cheat and open the map after about half an hour, when we realised we had been stuck in a complicated dead-end loop for the previous 10 minutes) and the little marker posts scattered throughout had trivia notes stuck to them, making it fun AND educational. Even a Trivial Pursuits junkie like me learned a few things.

Upon our exit, we found ourselves in a lovely recreation and play area, with obvious signs of a kitset outdoor cafe setting all around us. Stacks of chairs and rustic tables were stacked up against the side of the 92.2 XS 3d Maze building, plenty of room to set them up for the bigger crowds and busier days, swingball sets, tug-o-war ropes, even a volleyball court with proper sand bed and net... it was obvious that this place was geared up for the bigger crowds as well as the small family groupings.

Public toilets, a small but well-stocked gift shop and dairy and friendly, helpful staff completed the ensemble, rounding out to a wonderful summer venue which remains open until late March. The 3 mazes are, of course, the day maze (Escape from Egypt is this year's theme), the night maze (CornEvil), and the 3d maze... plus there is also a Haunted House as well... so plenty to do.

Overall, a great day was enjoyed by all, even our 4˝ year old cohort, who had great fun running ahead of us in the maze and reading off the numbers from the posts, so that we could locate ourselves on the map. The posts were not numbered in order, so you can't cheat by playing connect-the-dots, which added a nice twist. As we drove away, enjoying the evening cool-down, we were all in agreement... a return visit was in order... CornEvil sounds just too much fun to miss!

I had a five year old, and a seven year old to entertain for the afternoon. After listening to 'I'm bored...' for the 50th time I suggested we go to the "Amazing maze 'n maize". Secretly I had been wanting to go here since it first opened, I just hadn't had the opportunity.

We entered the main ticket office, where an entire wall shelf held toys and treats and souvenirs. We went to pay - $7 for students and $5 for children coming to $24 for all four of us. A family concession is available with 2 adults and up to 3 kids for $25. Maps for the maze are $2 each, this is refunded if the map is returned unopened. We were given a map for free as the 'watcher' lady who keeps an eye on everyone and directs lost people had gone to lunch. Everybody is also given flags, so if you do get really lost, you hold up your flag and somebody will come and get you.

So we began... the maze took us about half an hour to complete. We got lost a few times. The eldest child said the maze was 'boring', but the youngest loved it. When we had finished, the kids went and played with the many outside games which are available - there were hula hoops, limbo, volleyball, and lots more.

I saw two barbeques which were available for people to use - this is a great idea for families who wish to make an afternoon of it. We went inside and bought an icecream each, then we left.

Overall a great experience - I enjoyed it. I might pluck up the courage to visit the CornEvil maze in the near future.

The mythical city of Camelot, in a time before history began. A fanatical realm of legendary beasts and mysterious peoples. A dangerous world in which magic has been banned by the ruthless tyrant, Uther Pendragon. When Merlin, a young man gifted with extraordinary magical powers, arrives in the kingdom he quickly makes enemies including the heir to Uther's ... more...