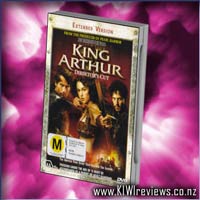 Disclosure StatementFULL DISCLOSURE: A number of units of this product have, at some time, been supplied to KIWIreviews by the company for the purposes of unbiased, independent reviews. No fee was accepted by KIWIreviews or the reviewers themselves - these are genuine, unpaid consumer reviews.
Available:
January 2005

I could almost leave it at that really... but I'm not going to. I want to have a rave about this brilliant, and far more plausible, version of the Arthurian legends.

When you think of King Arthur, you get Merlin the magician, knights in shining armour with high ideals and ethical standards far above mortal men. BZZZZT! SO on the wrong track! Having done a stint as a Living History Re-enactor, I learned that 'shining armour' was for display, and usually half the thickness of combat armour. REAL armour, worn out to battle, was often covered in pitch (a thick, sticky tar often used in modern life to seal concrete rooves) to stop it from rusting in the wet, muggy air, and blood of course.

I also learned that what we would consider 'a clever person with a basic grasp of psychology and chemistry' would be considered a 'magistre' or magician... mage for short. Merlin (and Guinevere) were both Wodes, a breakaway group of Britons who dyed their bodies blue in order to blend into the forest areas better. Worked really well in the movie, and even better in real life.

Arthur wasn't a king at all, he was a soldier, plain and simple... but he was a damned effective one, which is where his aura of mystery and unbeatable power came from, because he won his battles. He used his brain more than his weapons, and as well as out-fighting his opponents, he out-thought them too. His 'Knights' were Sarmatian Knights, the decendants of a proud but conquered group of fighters who remained standing after a great battle against the Roman legions.

Overall, I can't really go into too much more, lest I spoil it for you. However, if you think you know anything about the Arthurian legends, you really must see this movie. There's no great hocus-pocus magic, no spells and chants, there IS a great soundtrack, and some things that will make you sit back and say "Oh WOW! That's a new twist"... and you'll either accept it and love it, or you'll cling to the traditional stories and find this to be just a great action movie. I loved the swordfights, stunning, simply stunning.

Matt, a struggling executive, finds his world turned upside down when his estranged father's nurse shows up unexpectedly in his office. Matt's father, a famed bad-boy photojournalist, is facing terminal cancer and his dying wish is for Matt to join him on a road trip from New York to Kansas to process his last rolls of Kodachrome film before the sole remaining lab closes and those captured moments are gone forever.