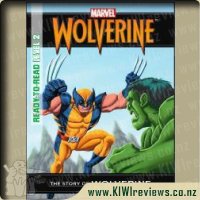 he adventures of the unstoppable Wolverine.

When It Happens
Rating: 7.9

This book has an interesting cover - it features two brightly coloured characters (one yellow and one green) snarling at each other! I read it with Mr Four who is not quite able to sound out the words for himself yet (he is just starting to learn to form his letters and to recognise them on the printed page). However, the story is uncomplicated and there are not too many words to a page, so he was able to follow the story easily. By the second time through, he was repeating the odd word and making his own comments on the plot.

He liked the idea that the main character was called James because he has an uncle Hemi, and that is the same name in Maori! He wanted to know if this was actually a story about his own uncle and I had to tell him it was unlikely but you never know!

He found it quite scary that Dog, who was supposed to be one of James' friends, would break into his house at night. At four, children should feel safe in their own homes, and this was not how things are supposed to happen. However, he liked the way James found a way to protect himself. At this stage we had to stop and look at our own hands to see if this could happen to other people too! Mr Three, who up to now had found little interest in the book, now pricked up his ears and offered his hands to be inspected as well.

We had to discuss what the word "mutant" meant, and why Logan (who used to be James) needed metal claws when he already had his own. As well as that, why did Logan have to be kidnapped when the men could have just asked him to go with them? Mr Four said he enjoyed the book but he still had lots of questions. Most of all, he wanted to know what happened to Dog and his father and whether they had to pay for the door they broke!

To be honest I never knew the background behind Wolverine. Have seen the movie but didn't touch on anything that I learnt in this book. I won this book earlier this year and my daughter choose to read it recently. Being a daddys girl, she wants to learn as much as she can about superheros.

It is a Ready to Read book Level 2. We have read other level 2 books but actually found this one harder than the rest to read. Maybe its because there were so many words on the page and she was rather daunted by the fact or maybe because it is a more complicated read. She only started school this year and is still a beginner reader. In the end we took turns to read, she would read one and then I would read the other.

I wasn't as excited by the pictures in this one either, they felt more squarish and like an old comic book. For $6 it is still a good read and you do learn a lot. I felt like it was rushed, maybe because I don't know that much about him besides the X-Men movies. I felt it jumped around more.

I had no idea that he had faced off against the Hulk and was rather surprised because I thought they were both good guys. Did like that they called a truce and called it even so it was like good still wins. I am learning along with my daughter and plan on surprising my husband with all my new found knowledge.

Last night for reading time, I sat down with my daughter and she got to pick out of all the books we had available. She choose Wolverine. I read all the words, but prompted her to read some of the ones she knew as well. She was so excited to read this book with me. The XMen are another group of Marvel superheroes that she really likes. She has grown up with a board-book about Professor X though Wolverine is not outlined in that one.

This book follows the origin story of Wolverine, from his early childhood before he was known as Logan or Wolverine. It follows him through quite a few changes and growth moments, but only touches on each thing very briefly. I did find the seemingly aimlessness of it a bit confused, but my daughter loved it. My husband has had a read and he says it has followed the movie plot. He was impressed by this little introduction to Wolverine.

I haven't seen that movie at all, nor have I read many comic books. He said that the comics and the movie were aligned mostly, and that overall this book offers a good origin story for Wolverine for young readers. The sentences are short and relatively simple. The story was interesting and kept her sitting with me. At $6 you can't go too wrong, especially if you have a reluctant reader or a kid who is into superheroes like mine.

Fashion, craft, and beauty -- all tied up in a ribbon

Nothing beats a headband for keeping your hair in style and out of your eyes. No wonder they are the current fashion accessory of choice, seen on celebrities, fashion models, and regular girls everywhere. But with all the stylish options out there -- classic bows, glimmering bands, sporty elastics -- finding the perfect headband can get pretty hairy.