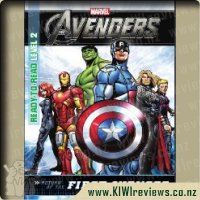 Sebastian Lives in a Hat
Rating: 10.0

Mr Four and Mr Three and I had just read two books and I was going to make them wait till morning to read the third, but they insisted they would not sleep until we had finished all three, so I let them bully me! Luckily the three books are all quite short, and it is just so good that they are into books at all - that is to be encouraged!

Like the others in the series, this one has glossy pages and full colour graphic novel layout. The pictures have lots of kid appeal; they tell the story so, even if the child cannot yet read, it does not prevent him from enjoying it. The image of Steve Rogers looking at the Uncle Sam poster meant we had to talk about what the poster represented - I am not sure if Mr Three got it, but Mr Four told me he thought the poster was not very nice because it is rude to point.

They liked Steve showing off his muscles after he had been through Project Rebirth. Mr Four told me he is going to be a professional footballer one day so he needs to get muscles just like Steve's. But when he looked at the next page he thought he might be a soldier instead. When we got to the part where Steve had been rescued from the ice and was invited to join the Super Heroes, Mr Four said he was definitely going to be a soldier too because he would get to wear a red, white and blue uniform rather than rugby shorts.

I like the way that this book opens up possibilities for children. Mr Four has never before mentioned (to me, at least) what he want to do when he grows up. All of a sudden he was talking footballers and soldiers - both prompted by the illustrations. He has a good imagination but the simplicity of the story and the detail in the graphics provided the stimulus for him to think ahead to his own future. And it will not be many more weeks before he will be able to re-read the story for himself.

I was so happy to win this as my daughter wants to be like her daddy and know all about super heros. This is a Ready to Read Level 2 and with my help my five year old daughter read the book. It had its moments where she required a little bit of help but sounding the words she managed to read most of it herself. We did read over a couple of nights so as not to overwhelm her to much.

It basically tells the story of the first Avenger Captain America aka Steve Rogers. It is pretty much the movie just recapped and was actually more enjoyable to read then it is to watch. I learnt more from this book then watching that boring movie.

I laughed when S.H.I.E.L.D. was mentioned as I have been watching the series on TV and when Nick Fury was mentioned actually felt like I was part of this superhero world as also knew who that was. It is a great little book and for $6 is a fantastic price. The pictures are very comic bookish but still are well done.

I think for any young superhero fans out there this book is a definite must. It teaches you so much and can not wait to read the rest of the series.

This is another great reader in the Marvel series, I was lucky enough to be asked to review this month. Again the topic of this reader is the Avengers, but this time the focus is on Captain America or Cap as they refer to him as a couple of times. The first time they called him Cap, both my daughter and I were confused by it. Then I remembered that some Spiderman books we got last year occasionally changed up the name he was refer to by as well.

This book has short and simple enough sentences. I found it a quick read, though my daughter struggled with it. I think though, this would suit a motivated new reader out until the age of 7. The illustrations are really neat, bright and full of action. They were really exciting to look at, and my daughter took extra time to look at each one.

I have seen the movie that this book was based on, and I found that it followed the plot pretty closely. There is a little violence in the pictures, but no blood and gore. The words themselves didn't allude to anything harmful. We both enjoyed this book, and I think we'll get some good use out of it practicing reading on the weekends. $6 for a book is stellar!

When unworldly student Ana Steele first encountered the driven, damaged young entrepreneur Christian Grey, it sparked a sensual affair that changed both their lives irrevocably. Now, finally together, they have love, passion, intimacy, wealth, and a world of infinite possibilities. But Ana always ... more...