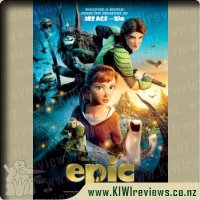 A teenager finds herself transported to a deep forest setting where a battle between the forces of good and the forces of evil is taking place. She bands together with a rag-tag group of characters in order to save their world - and ours.

This movie happened to be on TV while visiting a friend and since I hadn't seen it yet we watched it. I'm not normally an action fan so wasn't expecting much but I knew that good always wins and thought that this would be a good way to pass the time. I was pleasantly surprised to find that I did actually enjoy the movie and there was some really humorous parts.

The animation was great, really well done, the bad guys looked the part. I really liked the colourful plants and the way they moved and made the story more believable. The actors did the voices well, I wasn't sitting here thinking "I wonder who that voice is?" And enjoyed the movie more so I would say the movie was well cast and very well done.

My boys watched most of the movie before asking if they could go and play as they weren't all that sold on the movie, they prefer knights or dinosaur but at least they gave it a chance. My 7 year old said that the part he enjoyed most was the leaf men, he liked their looks and that they rode the birds. My 5 year old liked the whole movie but his favourite part was the guy with the silver hair as he was the main leaf man.

I will be looking out for this movie to buy on DVD as I feel it is a good story and it is very child friendly.

Every once and a while a movie is advertised that seems to tick all of the right boxes. Everyone gets excited and can't wait to see it. This was one of those movies. It seemed to have it all action, fairies, human being been shrunk to small fairy like forest creatures, romance, cute animals, flowers that are actually people, evil Boggans - it looked absolutely fantastic...... However, even with all that potential it just didn't get there. I am not sure what the problem was, maybe the script or the actors/voices but was rather bland.

After the death of her mother MK (Mary Katherine) visits her father a scientist obsessed with finding the little forest creatures that he believes lives there. Upset that she does not have her fathers full attention she goes to leave and return to the city. At the same time the Queen of the forest is killed and through some events MK is reduced to there size and must protect the pod and return it to Nim Galuu.

I think my biggest problem was actually with Colin Farrell. Although I love the guy his voice was just so boring and slow in this movie. He doesn't use his normal American voice but returns to his true accent and it just doesn't work for me. The movie could of been fantastic if it had a better script. Yet visually it is absolutely amazing. Everything in the forest is alive and you could truly believe it. The flowers are all people and it is really impressive. My daughters were like 'wow' as you see all those people/animals/flowers walking around it is really well done but then they talk and the illusion is wrecked. Even Beyonce could not save it.

Still it is worth a watch if just for the visuals maybe watch it in mute.

After the disastrous food storm in the first film, Flint and his friends are forced to leave the town. Flint accepts the invitation from his idol Chester V to join The Live Corp Company, which has been tasked to clean the island, and where the best inventors in the world create technologies for the betterment of mankind. When Flint discovers that his machine still operates and now creates mutant food beasts like living pickles, hungry tacodiles, shrimpanzees and apple pie-thons, he and his friends must return to save the world.