« The Spiritual Significance of Music review 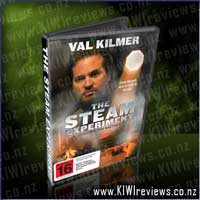 Disclosure StatementFULL DISCLOSURE: A number of units of this product have, at some time, been supplied to KIWIreviews by the company for the purposes of unbiased, independent reviews. No fee was accepted by KIWIreviews or the reviewers themselves - these are genuine, unpaid consumer reviews.
Available:
December 2009

A former university professor, James Pettis, boasts to the local newspaper that has he trapped six people and is holding them hostage in a steam room, to prove his hypothesis that humans will fall into chaos under the pressures of global warming.

Unless the newspaper publishes a front-page story on the professor's theory, he'll turn up the heat on the stream room lab rats. Meanwhile, as the temperature increases inside, the nerves of the hostages begin to shatter. Tempers flare, fights break out, people begin to die... the the professor refuses to break.

The only way out of this deadly situation is for Detective Mancini to engage in an intellectual game of cat-&-mouse against an opponent who truly has nothing left to lose. Will the steam room become their tomb?

I was given this at the last minute due to a scheduling conflict, and frankly I wasnt too sure what the premise was, but since it had Val Kilmer in it, who I have enjoyed watching in some of his earlier films, I thought it would be worth a shot. It was not at all what I expected, both better and worse than I could predict.
It was better in that it had the potential to be an utter disaster with a weak plot, bad acting, and gratuitous sexual scenes, none of which can about really, though there is one scene in which you do get to see quite a bit of one actress who, for the life of me, makes me think of a younger Angelina Jolie.
It was worse than expected in that it just seemed to fly by. The movie is 90 minutes long, but if you tune out all the stranger 'psycho drama' bits, you are left feeling like it took all of half an hour. Could have been even worse though, it could have felt like 3 hours. Sorry to say that though I liked many aspects of it, it really didnt live up to the level I would have expected for a movie with so many once-big name talents in it. At least four of the actors are people I have totally enjoyed in other roles.
Probably the biggest reason to watch this movie is that in todays world, global climate is going to be a major factor in our survival chances in the coming years. Depending on which set of scientists is right, the world is potentially about to get awfully cold (eg. 'The Day After Tomorrow'), very wet (eg. '2012'), or extremely hot. This movie gives some insight into what may happen to humanity in the third scenario. Humans are carbon-based, protein-constructed critters and as such are not well designed for living in extreme heat environments. If you want to know what happens to protein when it gets too hot, take a good look in the frypan next time you cook eggs.
All in all, though the movie had some rather dull moments, and a few predictable but still shocking ones too, it was worth a once-over.

When Oh, a loveable misfit from another planet, lands on Earth and finds himself on the run from his own people, he forms an unlikely friendship with an adventurous girl named Tip who is on a quest of her own. Through a series of comic adventures with Tip, Oh comes to understand that being different and making mistakes is all part of being human. And while he changes her planet and she changes his world, they discover the true meaning of the word HOME.