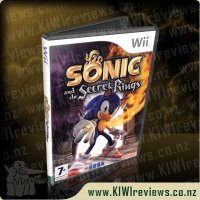 Sonic brings his trademark speed and attitude to the Nintendo Wii in his first solo adventure since 1991. In Sonic and the Secret Rings, Sonic finds himself in the colourful and vibrant world of the Arabian Nights tales. There he embarks on his most outrageous journey to date through an expansive 3D world brought to life with realistic water reflections, light bloom, and lifelike physics.

The story begins with Sonic turning the pages of the classic book, Arabian Nights. Suddenly, he is visited by the tale's central character, the Genie, who reveals that the last several pages of the book have mysteriously gone blank. This mystical being grants Sonic the ability to travel into the book's world. Armed with his signature speed, Sonic sets off on an adventure to retrieve the missing pages, and set the world of the Arabian Nights back in order.

Sonic and the Secret Rings makes custom use of the innovative Wii remote to create a truly immersive gaming experience. Mimicking the energy and movements of Sonic, players actively perform specialized moves with the controller, bringing their stamina and wide range of motion into the action! Players will hurtle Sonic forward by rotating the controller from side to side and perform combo moves with a flick of the wrist. This, combined with a dizzying sense of speed, will quickly draw players of all ages into the action!

Features:
•  Fast, frenetic game play with Sonic in constant motion. Taking full advantage of the Wii controller, players perform a variety of physical movements that actively advance Sonic, combat enemies, and perform special moves! Tilt the controller left or right to avoid obstacles, swing the controller forward to destroy enemies, or perform many other motions to advance the game!
•  Exotic settings and creatures inspired by the Arabian Nights tales. The unique and lustrous features of Persia offer a vibrant backdrop to Sonic's speed!
•  Branching paths for extensive game play variety and re-playability.
•  New Sonic moves. With the controller's exclusive features, utilize new moves such as boost and catapult. Players will feel and enjoy Sonic's speed in entirely new ways!
•  A variety of mini-games for up to four players. Work up a sweat using the Wii controller in a variety of ways in the home party games! With more than 30 exciting party games, enjoy playing the mini-games with friends and family!

I'm not a fan of sonic at all but I know the kids are and how often they ask for this game proves it. The first few times we tried we got a bit frustrated on how to move around the menu and how to choose the characters.

The mini games are great, the music to some of them are very catching. The graphics are great and once you figure out how to use the control to move around then the game gets interesting rather than frustrating. You can play in various ways, practice or against each other. Some of the mini games are easy and the controls are easy but some are harder to work out how to grab the treasure and what you are supposed to do once you have the treasure. I know the kids enjoy trying to find the treasure and often play in tournament mode.

I should give the game another go and just think like a child and have fun.

You build the game! Build your own Battleship, Aircraft Carrier, Destroyer, Submarine and PT Boat brick by brick. Build them our way, or create your own! Then, call out the shots. Hide your ships and fire your weapons! Was it a hit or a miss? Destroy all of your opponent's ships to win! Change your game by bulking up your fleet; build heavily ... more...