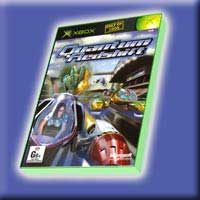 2102 and racing has evolved into a worldwide obsession. The Quantum Redshift World Championship is the ultimate test of speed, skill & cunning. 16 Elite pilots battle at speeds exceeding 900 mph. Fueled by deep personal rivalries and with over 150 weapons at their disposal, there is absolutely no reward for second-best.

Though this game starts out being rather unimpressive, repeated playing and some dinky tricks can have you ready to customise your craft within a few races. The range of weapons is stunning, with three categories possible on each craft; unguided (such as bombs, plasma balls etc), guided (mostly missles) and defensive (such as shield regenerators).

The course is littered with power-ups, colour-coded for each weapon group, Red for Guided, Blue for unguided and Yellow for defensive, plus the Black and White stars, which will power up all three groups at the same time. If you are crafty, and not too worried about winning a race by time alone, you can get ahead of your opponent, come to a full stop directly under a power-up and just top yourself right up, then scoot off again blasting your opponents until you're in the lead again. I suggest shooting your opponents until you are way ahead, park yourself right on a Red power-up, turn and face back the way you came, and as soon as you see your target indicator light up, start shooting... as you let loose a missle, the power-up will regenerate your lost munitions!

On a technical level, this game was quite impressive, but a little under the hyped level of realism that the XBox is pushing for. Some serious clipping errors had me able to see through walls for a split second, enough to spot the danger and blast it before it got me. Useful, but reduces the overall 'realism' of the game. I still found it to be worth a serious blatt, and had some awesome fun blasting my brohter as he tried to win the race ahead of me... it was well worth the huge lap times.

* Travel around the board with your crazy Cupcake movers, and count and spend your cash along the way
* Collect Party cards and prepare for a super surprise when you open the Party Box
* The property-trading favorite builds extra fun into this fast-moving Party edition for kids
* Players practice counting skills as they collect Party cards and buy and trade properties
* Comes with Gameboard, 32 Present tokens, 16 Chance ... more...