« Guardians of Ga'Hoole: The Rise of a Legend review

ProdID: 4772 - Underland Chronicles 2 - Gregor and the Prophecy of Bane -  Written by: Suzanne Collins 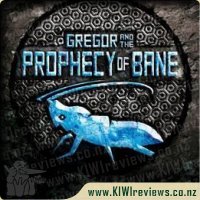 Underland Chronicles 2 - Gregor and the Prophecy of Bane product reviews

In the months since Gregor first encountered the strange Underland beneath New York City, he's sworn he won't ever go back. But when another prophecy, this time about an ominous white rat known as the Bane, calls for Gregor's help, the Underlanders know the only way they can get his attention is through his little sister, Boots.

Now Gregor's quest reunites him with his bat, Ares, the rebellious princess Luxa, and new allies and sends them through the dangerous and deadly Waterway in search of the Bane. Then Gregor must face the possibility of his greatest loss yet, and make life and death choices that will determine the future of the Underland.

Suzanne Collins has created characters and a world that are capturing countless imaginations. This second installment of the Underland Chronicles is sure to win her even more enthusiastic fans.

The characters are well written, there are some familiar ones and some new ones they move into other areas of the underland in the search for the bane. There were some things that were unexpected and left Gregor to make a difficult choice and be labelled a traitor for not completing the quest but that is when you read the prophecy again and see that it can be interpreted in more than just the one way. I have some suspicions about the neighbour that Gregor gets a part time job with so will be reading the rest of the series to see how accurate my guesses are.

The book was easy to read, I managed it in just one afternoon so it would be good for kids with short attention spans, long enough to tell the whole story but not so long that they lose interest. I am really looking forward to the rest of the series as I would love to know just exactly what Gregor is supposed to do and how he is supposed to do it.

Delving back into the world of the Underland we rejoin Gregor and his family just a few months after the events of the first book.

What I really liked, just from the first chapter is that we are shown that there was no quick fix for his father and that Gregor's hopes haven't come to life. He's just eased himself back into his old life, helping out his family as best as he can. The first book ended with the Underlanders crying "See you soon" which confused Gregor and of course he didn't want to go back.

Soon enough Gregor and Boots are back in the Underland fulfilling another prophecy. This book develops familiar characters in a great way, we're not expected to know everything about them all and Gregor and Luxa are still learning to get along and like each other.

This is a great addition to the series and I'm really looking forward to the next five. I can't wait to see where Gregor and Boots go from here and just how Gregor and the Underland pan out.

Left for dead when she was two' Kannon Jarratt has no idea of her real identity. Now' twenty years on' she discovers that her mother might be US Time Marshal' Victoria Dupree.

Kannon travels to ancient Rome where Victoria is investigating the Hierophant' mysterious leader of the Isis cult. To find her mother' Kannon becomes a gladiatrix in the service of Domitia Crassus' the only person who knows the Hierophant′s identity.

Unfortunately' all paths are leading her to an epic battle to the death in the arena ...