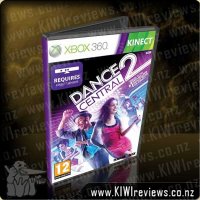 Disclosure StatementFULL DISCLOSURE: A number of units of this product have, at some time, been supplied to KIWIreviews by the company for the purposes of unbiased, independent reviews. No fee was accepted by KIWIreviews or the reviewers themselves - these are genuine, unpaid consumer reviews.
Available:
november 2011

What Is Dance Central 2? Get ready for the sequel to the best-selling dance game for Kinect for Xbox 360! Premier music video game developer Harmonix expands the Dance Central universe with new simultaneous multiplayer, voice controls and all-new routines set to an unstoppable soundtrack featuring Usher, Rihanna, Lady Gaga, Nicki Minaj, Bruno Mars, Daft Punk, Montell Jordan and more. Meet new dance crews and get down with friends to prove once and for all who really has the best moves!

Power of Voice. Jumping into a routine is as simple as telling Kinect the song, mode, and difficulty and instructing it do what that little box has always dreamed of - "Xbox, dance." Getting into the groove is easier than ever before - the main menu is voice enabled to help you get to the dance floor in a hurry, and commands in Break It Down let you set the pace for your rehearsal sessions without missing a step. Need a break? Just say "Xbox, Pause."

It's Party Time! Dance Central 2 keeps the wildly addictive Dance Central experience going with a new focus on simultaneous multiplayer. Friends can team up in Perform It or choose a crew to go head-to-head with a friend in a fierce Dance Battle. And things get really interesting during Dance Battle when the all new Free-4-AII minigame appears, allowing players to quickly perform moves worth tons of points and jump ahead in score. Players can drop in or out at any point during a song, so the party never has to stop!

As Real As It Gets. Dance Central 2 provides detailed full-body per-limb feedback for each player, allowing them to refine their moves. A reimagined "Break It Down" mode lets dancers dive even deeper into practicing, and all new authentic original choreography continues to set the bar for full body dance games! Harmonix continues to combine time-tested technical savvy and design polish with the fun and authenticity of the dance world to create an unparalleled dance experience.

Kick It With the Crews! Crews are the perfectly paired partners with unique personalities that make up the world in Dance Central 2. In addition to playing along with them in Perform It and Break It Down, you'll also be able to choose which crew you rep in Dance Battle. Unsure which crew best represents you? You'll get a chance to meet all of them and test your mettle with the Crew Challenge, Dance Central 2's campaign mode. More on Crew Challenge later this fall!

Perfect Your Performance. Dance Central is all about learning real routines with full body choreography. Dance Central 2's completely redesigned Break it Down mode lets you get into the groove better than ever before. Customise practice sessions to focus on select moves, and use the power of Kinect's voice commands to move your rehearsal along or slow down. You can even record yourself dancing a move and compare video with an onscreen dancer.

Dance Central 2 features an unparalleled soundtrack of more than 40 new dance hits and classics, including:

There are 5 game modes included in the game, they are as follows:

• Perform It: This mode is the basic play mode of the game, in it you get to first learn the moves of the selected song, and then you get to perform the moves together as the song plays. The more accurate and in time with the directions on the screen you are the more points you score. The more points you score and the difficulty goes up. As the difficultly goes up so does the requirements to get the moves right, as the margin of error gets reduced.
• Workout Mode: This is essentially the same as Perform It but this one also counts the amount of estimated calories that you have burnt whilst dancing along to the songs. I personally think this is a great idea, especially if your a bit self consious about going to a gym, you can get all the exercise you want in your own home and have fun at the same time.
• Dance Battle: This is a two player mode where you can dance against each other to score points and to prove who is the best dancer between you, this is great for competitiveness and also results in much sabotage as you each can try and put the other off whilst still doing your best to get the most dance moves rights

• Challenge Mode: This mode as the name says is made up of challenges with each challenge/difficulty level having four or five songs in its category. In order to complete the category and unlock the relevant challenge you need to get a rating of four stars or more on each song in the difficulty category. Once this is done the challenge is unlocked, you must then get more than fours stars in each of the challenges in order to unlock the final challenge. This to me is the more difficult of all the games modes, but is also the one that will keep brining people back for more.
•  And lastly Break it Down: This mode is essentially a way of helping you learn the various moves by letting you practice the moves one-by-one in a practice enviroment.

Also as with most Xbox 360 games there is the DLC (Downloadable Content), in this case you can download extra songs. An added bonus is that all the DLC for the original Dance Central is also compatible with this version, so you can now get a total of 44 new songs to add to the game. And with each new song there is also a new dance routine included as well.

I think this is a brilliant game and an excellent use of the Kinect hardware.

In Disney Fantasia: Music Evolved, players enter the magical realms of Fantasia, selected by the legendary sorcerer Yen Sid to hone their musical and magical prowess as his new apprentice.