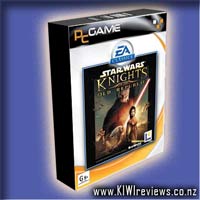 Engage in this saga set in the Golden Age of the Republic - over 4,000 years before the first Star Wars film, when both Jedi and Sith number in the thousands. With the Galaxy reeling from a recent conflict with the Dark Lords, the ongoing battle between the Jedi and the Sith rages on. Your actions determine the outcome of this colossal galactic war - and your destiny as a Jedi.

• Immersive, action-packed Star Wars role playing experience with customizable and evolving playable characters.
• Your group, comprised of up to 3 characters, can include humans, droids, Twi'leks, Wookiees and more.
• Fast paced mini-games -- such as racing swoop bikes, or manning turret guns.
• Journey spans ten different worlds ranging from the familiar to the new.
• Locations include Tatooine, Sith world of Korriban, Jedi Academy on Dantooine and Wookiee homeworld of Kashyyyk.

I'm a Star Wars fan ever since I can remember (unfortunately I was just a little too young to see the original Star Wars when it first came to the cinemas in 1977), but when I did see it a couple of years later it totally blew my mind and it forever changed they way I looked at things (and also explains a few things about myself as well to those who know me

) ever since then I have been a full fledged Sci-Fi fan and I readily devour anything that is good Sci-Fi and this game is no exception.

As the blurb says it is set 4,000 years before the events of the Film six-pack, and you are right in the middle of the Sith/Jedi war and it's outcome depends almost entirely on you.

Developed by those wonderful electronic wizards at Bioware who were responsible for games like Neverwinter Nights and Jade Empire this is another example of why these guys are the current best at RPG's.

Like most of their other games the way you play your character is entirely up to you and will affect the way things occur in the game, so you can choose to be a good and kindly Jedi, or a dark and corrupted Sith, either way it's a joy to play and the many different weapons, and skills mean that each time you play it plays a little bit different.

All in all this is a joy to play.