« The Chronicles of Tyria - 1 - The Silver Hawk review 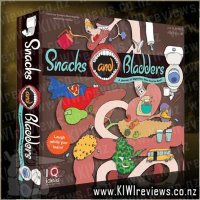 A Journey of Digestion from Food to Flush!

Snacks and Bladders is a wonderful exploration of the human body and the food we eat to fuel it. Correctly identify body parts and make wise food choices to stay ahead of your opponents as you travel through the digestive system. An entertaining way to learn about this facinating subject.

•  As relevant & entertaining in the home as it is in the classroom
•  For 2-6 players or teams
•  Engages children (and adults) through clever text & hilarious illustrations
•  Teaches anatomy, human biology, diet & nutrition in a fun and accessible way

Personally, though I think the theme of this game is a little icky, the kids loved it! No surprises there, they're boys.

This game was a real hit at a gathering of 10-11 year olds, who played it well past their regular bedtime and seemed to enjoy the 'gross factor' as much as the gameplay, and didn't even seem to mind the high educational content of the game.

Well designed, well constructed and fairly intuitive, the game did get the kids hung up a little in places, but a few moments of adult intervention got things back on track and the game continued unabated.

Overall, I thought the game had a lot going for it, and managed to pull off some great 'nutrition education' without feeling like it was ramming healthy food concepts down the kids' throats. They were able to enjoy the game, and later that evening one poor chap learned for himself why bulk snarfing of junk food is bad for you... much to the misery of himself, and the nasal abuse of the other kids who stayed for a sleepover afterwards. Lesson WELL learned.