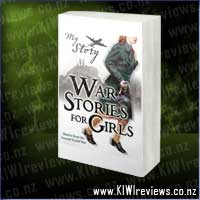 Kitty signs up as a Red Cross nurse in a military hospital and is soon nursing casualties of the war raging in Europe.

Sophie joins the Resistance movement in northern France and becomes involved in a dangerous plan to save a young soldier.

Edie and her little brother are caught up in the horror of the London Blitz and evacuated to the Welsh countryside.

I found this a fascinating concept, a little bit like the diary on Anne Frank, only much tamer.

Kitty is nineteen and through her eyes, we get a glimpse of the hospitals and nurses during WW2. She is cute, a little shy, but ultimately determined and heroic. I enjoyed her story and could easily have read a whole novel about her. I found myself wanting to see where her budding romance with the doctor might go... but sadly the story ended and it was on to the next girl.

Sophie was my favourite character of the three. Only fourteen, she was in the heart of German-occupied France and determined to do her bit. I liked her ingenuity, courage and cuteness. Her attachment to the Scottish soldier was well crafted, but again, I found myself wishing there was some conclusion to their story.

Edie's story was the last and reminded me strongly of the Chronicles of Narnia. She is a lot like Susan, scared but sort of bossy, especially with her younger brother. I did not find this one quite as engaging as the previous one, primarily because I didn't like the central character so much. Still, I did think she stepped up and took charge when the need arose, which was cool.

Each of the stories has a historical blurb at the end explaining the context and facts surrounding the story plus a timeline of relevant real events. Given that I have never had an interest in WW2 (too much violence and pointless death) I appreciated reading about it in a way that addressed the normal lives of normal girls in extraordinary circumstances. This is a very accessible way to introduce girls to real history and for that, I highly recommend it. It is probably a good 'slice of life' length for the audience, though I would have personally preferred longer, full novels that had genuine conclusions.

Still, I am keen to get my hands on the other books in the 'My Story' series including "Road to War" - about the first world war, "Tudor Stories for Girls", "Pompeii" and "Titanic". This series is great for making history interesting!

My kiwi gumboots reach up to my knees.
They are the colour of cheddar cheese.
They are different from Mum's and Dad's, it's true
But when I grow up I'll have Red Bands too.