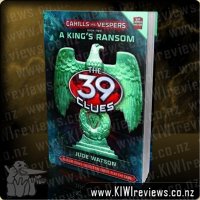 The 39 Clues - Cahills vs Vespers 2: A King's Ransom product reviews

When seven members of their family were kidnapped by a sinister organization known as the Vespers, thirteen-year-old Dan Cahill and his older sister, Amy, vowed that they'd stop at nothing to bring the hostages home. But then the ransom comes in and the Vespers demand the impossible. Amy and Dan have just three days to track down and steal an ancient map. The only catch? No one has seen the map for more than half a century.

Now Amy and Dan are on a desperate search that will lead them to Nazis, spies, a mad king, and some of history's dirtiest secrets. It's the race of their lives... and one mishap will mean certain death for the hostages.

Children of the Lamp:  The Grave Robbers of Genghis Khan

The second book of this series is finally here! A King's Ransom starts straight off from where The Medusa Plot left it. What I enjoy about this book is the codes and clues that are hidden in the cover, page and cards. This book brings you across the world, to near suffocation, to Nazis and to history's dirtiest secrets all while sitting in the safety and comfort of your home. This book really drew me in with its references to history, the near miss situations and the basic plot of the story.

The plot is similar to The Medusa Plot; The Vespers Capture 7 members of the most powerful family of the world - The Cahills. Now they demand Amy and Dan to do tasks for the safety of the hostages. But this time the mysterious man known as Vesper One demands an ancient map not seen for eighty years. And they only have 4 days to do it!

During this series Dan has been gathering the ingredients for Gideon's master serum. I have no idea what is going to happen when Dan takes the serum but I can't wait to find out. Some of the codes in this series are really hard and even when you translate it all you get is a bunch of meaningless letters. The website is awesome and pretty hard.

I would recommend this book to anyone over 10 years old. I can't wait to read the next book of this amazing series!

Old Nazi secrets and giant castles! In a word, awesome.

The journey continues straight on from book 1 of this second series, not taking much time to fill you in on what has already occurred, which I appreciate. These books are very short and it would be a pity to waste any of their precious pages on people who haven't bothered to read the whole thing in order!

Even more so than the original, the Cahills vs the Vespers series weaves themes and plot through each of the episodes and although there is a new task each time, the overarching plot develops more gradually. I can barely tell that each book is written by a different author - the plot and character development has been so well planned.

I enjoy the direction the characters are going, especially with the introduction of two new (and very cool) brothers - Jake and Atticus - and the mysterious third element, the Guardians. Some aspects of the plot are getting a lot darker and daring to delve into themes the first series only skimmed past. I am eager to read more and see where all of this goes. If it's anything like before, the conclusion will be most rewarding!

Well, I must say that this book was a lot better than the first one: The Medusa Plot. I was worried that this book would never turn up, but many weeks after it arrived, I actually put aside the first batch of review books that had come in and flew right into this one. The mission that came online when I entered the book cards in was awesome, in it you had to rely on the skills in the first mission, it had no training session, so you had to do the first mission if you wanted to get anywhere. The puzzles were quite simple actually, I got some good medals from completing it, in fact I was able to get a gold medal for the Lock-picking puzzle.

The cover looked good, and at first glance I was able to find two hidden things, one in the background, one on the eagle statue. The story went well and also introduced a character which I had discovered in the Medusa Plot mission, it was the Vesper enforcer, A.K.A Vesper 6. I found that there were several cool parts in the book, I could experience them in my head, I could nearly get killed, nearly run out of oxygen, and even travel all over the world and never even have to leave my room. One of the cool thing about this series is that each one shows that Dan Cahill is re-assembling the 39 clues into Gideon Cahill's serum, so I can not wait to see what happens when he has finished. The first rule of show business is to leave them begging for more, and the author of the is book, Jude Watson, author of The 39 Clues books 4, 6 & 11, has certainly followed this rule!

I must point out that most of the codes in this book are very hard to solve, and even the codes I do know how to break come out as gibberish! The price is good, very reasonable since it is so enjoyable, and in adult terms that's very cheap! The book is good for people over 10 years of age, as there is a lot of action that may upset any kids younger. I am definitely going to read this book again someday, and that's for certain!

The curse has resurfaced . . . As fifteen-year-old Nicola takes to the water, her parents begin to discover that the truth they tried to drown is coming back to haunt them. And when girls start dying, it's only a matter of time before they will all be dragged back under . . .