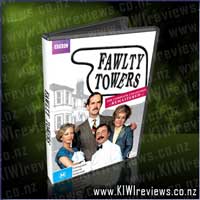 FAWLTY TOWERS: THE COMPLETE COLLECTION REMASTERED
Manic, condescending, sycophantic and rude, John Cleese as Basil Fawlty is one of the funniest British comedy creations ever shown on television. Marking the 30th Anniversary of the series, this Special Edition DVD Box Set is released just in time for Christmas 2009.

Every episode of the BAFTA winning sitcom has been fantastically remastered, with a whole host of special features including, for the first time ever, audio commentaries from John Cleese on all 12 episodes.
Fawlty Towers was famously inspired by an unbelievably rude hotel proprietor John Cleese encountered whilst filming with Monty Python and remains Britain's best-loved television comedy.

Each storyline remains a classic, with every guest another inconvenience in Basil's life - from the regulars, eccentric dodderer Major Gowen and charming elderly ladies Miss Gatsby and Miss Tibbs, to visitors such as Bernard Cribbins' fastidious spoon salesman and the deaf but imperious Miss Richards.

Whether it is builders, Germans, wedding guests, American tourists, corpses or even rats, there's always someone or something to drive Basil to desperation.

Fawlty Towers remains as popular today as it has ever been and now, fantastically remastered, this comic masterpiece is ready to be savoured again and again.

Fawlty Towers is one of my all-time favourites. I was probably too young to be allowed to watch it first time around - this was 1975 and I was 5 at the time. Even if my parents had allowed me to watch it, it would have been mostly above my head at that time. However, as I grew older, I do remember my dad encouraging me to watch it - and a life-long addiction was born (Thanks Dad.) but the occasional showings by the BBC meant I couldn't feed my addiction often enough. Now, I can feed my addiction as often as I feel the need (Thanks BBC - eventually!)

What is it about Fawlty Towers that has ensured its continued popularity? The sharp scripts? The calibre of the actors? The fact that even today, people who have never seen Fawlty Towers say "Basil" in Sybil fashion? It may be a constant frustration that wannabe chefs insist on saying "Basil" in that inimitable tone; but that just goes to the enduring power of Fawlty Towers.

Each episode has been remastered and is in clarity never seen before. Ok, so I may have only ever watched re-runs of TV periodically, but the remastering was a treat to behold. The accompanying booklet tells the whole story of the origins of Fawlty Towers and explains the delay between the first and second series - some 4 years later. In all, 12 episodes were made - and that's it.

At the time of writing, I have yet to watch the cast interviews, but that is something I am truly looking forward to seeing, especially the interview with Connie Booth, who has kept away from the limelight since Fawlty Towers, and has carved out a new career. For a long time, Connie has refused to talk about Fawlty Towers.

BBC DVD is proud to announce the eagerly awaited DVD release of the final story of the classic Doctor Who series - Survival. This 40th Classic Doctor Who DVD release stars Sylvester McCoy as the seventh Doctor, Sophie Aldred as his companion Ace and Anthony Ainley as The Master.

Survival is the final ever story in the original Doctor ... more...